These 5 Facts Explain Why We Need the United Nations

International flags fly in front of the United Nations headquarters on Sept. 24, 2015, before the start of the 70th General Assembly meeting.
Dominick Reuter—AFP/Getty Images
By Ian Bremmer

Unless you were born before 1945, you aren’t old enough to remember the catastrophes that gave birth to the United Nations and the surge of idealism that defined its mission. The UN charter commits the organization to, among other things, “promote social progress and better standards of life in larger freedom,” to “reaffirm faith in fundamental human rights, in the dignity and worth of the human person, in the equal rights of men and women and of nations large and small” and to “save succeeding generations from the scourge of war.”

Given the scope of that ambition, we shouldn’t be surprised that the UN has produced major successes over its 70 years—and major failures. Though they represent a tiny part of the UN story, these facts help bring both into sharper focus as the organization prepares to celebrate its 70th anniversary.

In war zones, public health hotspots, and natural disasters, hundreds of men and women have died in service to the United Nations. Thousands continue to risk their lives every day.

Here’s a very small sample of the work that UN agencies have done to promote and protect health and wellbeing around the world. UNICEF, the United Nations Children’s Fund, draws donations from governments and private donors to serve the needs of children and mothers in developing countries. It feeds more than 80 million people each year, has helped more than 2.6 billion people gain access to clean water and has brought new vaccines to more than 400 million of the world’s children. The World Health Organization, the specialized agency of the UN that helps governments manage public health crises and fight both communicable and non-communicable diseases, was the main driver behind the eradication of smallpox, an accomplishment that probably saved 150 million lives. The UN’s work in support of health and wellbeing extends beyond these agencies. For those most cynical about the UN’s value, what other institution could take on the day-to-day responsibilities that generate such success?

The UN also helps people survive wars and rebuild their lives after the violence has ended. In 2014, the UN’s High Commissioner for Refugees (UNHCR) provided food, shelter and security to nearly 12 million refugees around the world. As we’ve been reminded yet again in recent weeks, these are people who desperately need help—and will need it for some time to come. By the end of 2013, more than 50 percent of those cared for by the UNHCR had been in exile for more than five years. The world has a short attention span when it comes to humanitarian crises, making the sustained commitment of the UN all the more critical.

But the UN is charged with more than emergency relief; it also calls those responsible for war to account. To that end, the UN has played a critical role in setting up the war crimes tribunals that prosecuted Charles Taylor (Liberia) and Slobodan Milosevic (former Yugoslavia), among others. In total, the UN has handed down more than 250 indictments for war crimes. No one can say that justice is always served in these cases, but no other institution has the moral authority and perceived objectivity to even attempt this work.

It’s one thing to help the refugees; it’s another to prevent the wars that put them at risk. In Rwanda in 1994, UN peacekeepers failed to stop the initial slaughter of Tutsis by Hutus, and the eventual result was a genocide that claimed the lives of 800,000 Rwandans—about 10 percent of the country’s population. The UN can’t claim that the carnage was unexpected. A Canadian general serving as part of a UN peacekeeping force cabled a warning that horror was on the horizon. The UN Secretariat failed to act on those warnings.

During the war in the former Yugoslavia, the UN designated the Bosnian town of Srebrenica as a “safe zone,” disarming Bosnian Muslims who entered in search of safe haven. When Serb forces surrounded the village in July 1995, the 110 Dutch soldiers left behind to guard its inhabitants could not save them. Some 8,000 Muslim men and boys were massacred. Similar UN failures have cost the lives of thousands of innocents in Sri Lanka and the Democratic Republic of Congo.

In 1996, the UN Security Council approved an “Oil for Food” program to allow Saddam Hussein’s sanctioned government to sell limited amounts of oil through the UN to provide the Iraqi people with food and other necessities. Saddam’s government used the program to draw about $1.8 billion in illicit income. About 85 percent of that total came through kickbacks on the sale of humanitarian goods. Most of the rest was derived from surcharges paid on oil contracts.

In addition, for many years, UN peacekeepers have been accused of sexual assault or exploitation, particularly in Africa. Current Secretary-General Ban Ki-moon spoke forcefully on the issue before he took up his post. While the UN has acknowledged nearly 500 more incidents of sexual misdeeds committed by peacekeepers during Ban’s tenure, Ban has done little about it. Only this year did he for the first time remove a commanding officer.

More recently, human rights groups sued the UN after evidence emerged that peacekeepers had triggered a cholera outbreak in Haiti that has killed nearly 10,000 people and sickened hundreds of thousands more by dumping human waste into Haiti’s largest river in October 2010. A U.S. judge threw out the lawsuit earlier this year because the UN Charter provides its representatives with legal immunity. For an organization that demands accountability from others, it must start with itself.

Eight men have served as UN Secretary-General. They are Norway’s Trygve Lie, Sweden’s Dag Hammarskjold, Burma’s U Thant, Austria’s Kurt Waldheim, Peru’s Javier Perez de Cuellar, Egypt’s Boutros Boutros Ghali, Ghana’s Kofi Annan and South Korea’s Ban Ki-moon. None was more controversial than Waldheim, who lied about membership in a Nazi youth organization and the details of his service to the German army during World War II. But a larger problem for the UN itself is that its leaders often emerge from within the system they are expected to reform. Perez de Cuellar served in various capacities within the UN for more than a decade before becoming secretary-general. Kofi Annan spent nearly 30 years within the UN before assuming the top job. With a UN career that began in 1975, Ban Ki-moon played multiple roles within the organization before succeeding Annan in 2007, after spending a couple of years as foreign minister of South Korea.

Ban’s term ends late next year, and the process of choosing his successor will dominate thinking within the UN throughout 2016. Maybe it’s time for leadership from outside the organization. 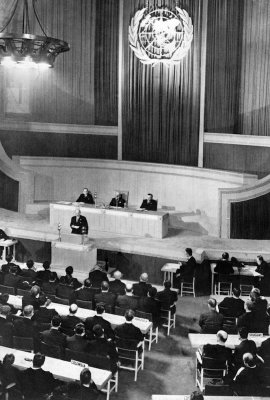 What Today's U.N. General Assembly Has in Common With the First One Ever
Next Up: Editor's Pick