As part of his six-day tour across the U.S., Pope Francis addressed a joint meeting of Congress on Thursday morning, in a rare English address to thousands who stood outside the Capitol.

The spiritual leader, known for being more liberal than his predecessors (and perhaps relative to members of Congress as well), encouraged congressional leaders to put their political differences aside and focus on some of the most recent, divisive issues including income inequality, immigration policies, and climate change. Here’s the root of the “Pope-onomics” plan from the pontiff himself:

Although Francis disavows the liberal tag, he tends to larger economic issues—for example, balancing the ever-towing scales of income inequality in the U.S. and providing care for the world’s poor. Ever the modernist, the pope’s reference to poverty was aptly timed – more than 60% of Americans now experience poverty at some point in their life.

The pope also implored everyone from Millennials to retirees to put all of their energy toward building a better American economy through social consciousness in a way that would make Vermont Sen. Bernie Sanders blush.

Running opposite to recent comments made by several GOP presidential candidates, Francis indirectly urged the U.S. to spend on people and the environment, that the key to America’s future prosperity is supporting, financially and otherwise, those in need as well as spending to protect natural resources.

While the U.S. government spent more than $21 billion on climate change initiatives in 2014 (down about a billion from the year prior) Pope Francis says it’s up to “America’s outstanding academic and research institutions” to influence political decision-making when it comes to areas of technology and the environment.

After the address, the pope decided he would eat his lunch with D.C.’s ‘most vulnerable’—not Speaker John Boehner (who wept during his speech), House Minority Leader Nancy Pelosi or Senate Majority Leader Mitch McConnell, but D.C.’s charities and homeless instead. Message delivered, Francis. 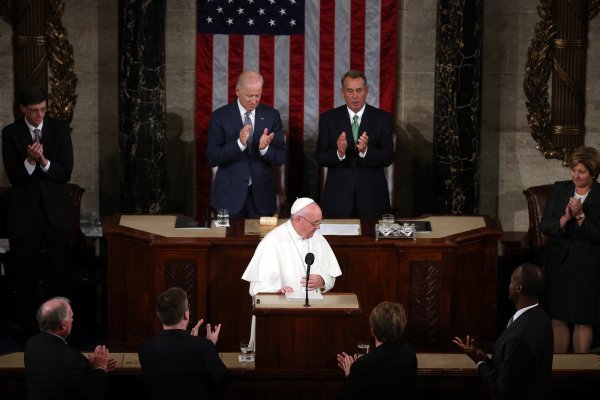