Is Mommy Blogging Fair on Kids?

Writing about my husband is one thing; where do I draw the line with my kids?

Famed mom blogger Heather Armstrong — better known as Dooce — wrote about the reasons behind the dwindling coverage of her older daughter on her blog. She mentioned that her daughter had been squeamish lately about getting her photo taken, and also wrote that she now asks for her daughter’s permission before mentioning her on the blog.

It brings to mind questions that have been swirling around the blogosphere for a while now: Do parenting bloggers compromise their chidren’s safety by revealing so much online? Is this type of blogging exploitative? How much is too much, and where should we draw the line? Susannah Breslin muses over at The Frisky, “… it makes one wonder if what Leta [Armstrong’s daughter] is having a hard time with is the fact that her mother made her life public — without her permission.”

I’ve focused on the personal essay for almost 10 years now.

When I began writing adult content about eight years ago, I became comfortable revealing more than just my emotions.

I found that opening up about the most intimate parts of myself was conducive to healing… not only for myself, but for others who read my pieces and realized they were not alone. Suddenly, they felt comfortable engaging in a dialogue around a subject they had kept quiet about for years. That openness and honesty is now the most important aspect of my writing.

We tried out a plethora of sex toys, lube and condoms, after which I wrote up the details of our experiences for a number of publications. We even appeared in Women’s Health as a favor to another sex writer I knew, revealing the details of our sex problems and posing for the mag with toys and a tickler.

One of Michael’s co-workers at the time happened upon the piece and, by the end of the day, it had been passed around his entire office, with much teasing and fanfare. Poor guy. But, to his credit, he didn’t withdraw from my writing.

These days, I still allude to my sex life in my bi-weekly sex column, and I’m constantly drawing upon my life with Michael when I create content for YourTango. I’m so lucky to be married to someone who doesn’t mind having a starring role in my work.

But we’re trying to have kids, a move that will change our lives drastically. I’m wildly excited about this. We both are. I’ve always wanted to be a mom — one much like my own mom. But how do I figure out what to reveal — and what not to reveal — when it comes to writing about this new experience? How much can I exclude when it comes to something that will undoubtedly change my life?

I turned to several parenting bloggers to get their opinions on where to draw the line.

Heather Sobieralski of My Mama Mojo has this to say about her openness when she writes:

When I asked for his thoughts on whether or not bloggers should get permission for the things they write about their children online, Evans said:

I agree with Evans and Sobieralski, for the most part. Honesty in writing is key, and so much about parenting is universal.

But as I remember my own childhood — as a girl who was easily embarrassed by her parents without the aid of the Internet — I get the feeling that I’ll end up censoring myself anyway. My husband was always a willing participant. But my children won’t know any better, at least at the beginning. And this makes me squeamish.

Perhaps this is another parenting decision we’ll have to make together.

This article originally appeared on YourTango 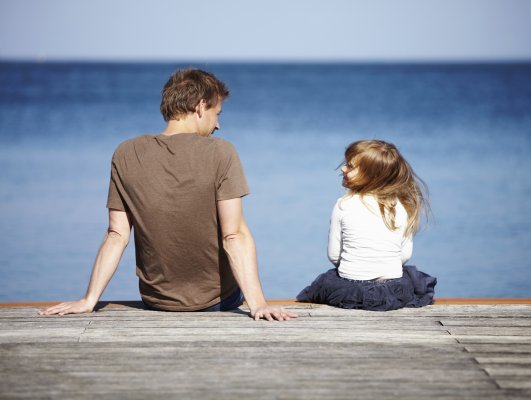 Why I Let My 8-Year-Old Use Swear Words
Next Up: Editor's Pick