Los Angeles will once again let federal immigration agents into its jails so they can potentially deport violent inmates who are in the U.S. illegally and about to be released.

The county had previously banned federal agents from entering jails to question illegal immigrants for potential deportation. But two murders in California this year in which illegal immigrants have been charged have shifted the debate, especially the death of Kathryn Steinle, who was shot and killed in San Francisco on July 1. The suspect, Juan Francisco Lopez-Sanchez, a Mexican national, was in the U.S. illegally and recently released from jail. That incident gained national attention after Donald Trump, the leading GOP presidential candidate, repeatedly brought it up on the campaign trail.

The new policy is a move away from the protection illegal immigrants have seen around the state thanks to the Trust Act of 2013, which safeguards immigrant inmates in California who have not committed violent crimes. A number of cities in California have essentially denied Immigration and Customs Enforcement agents access to inmates. According to Los Angeles County Sheriff Jim McDonnell, the county’s new policy will allow Immigration and Customs Enforcement agents to interview all inmates about to be released. 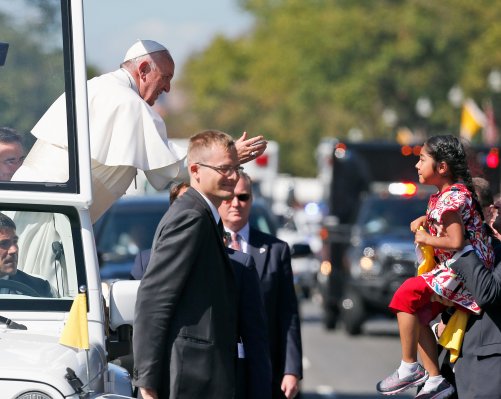 Girl Sneaks Through D.C. Barricades to Deliver T-Shirt and Letter to the Pope
Next Up: Editor's Pick