I’ve lived in Russia, on and off, for four years, and I’ve noticed my neighbors take a different approach to parenting than I do. Here in Moscow, it takes a village to raise a child – and you’re part of that village whether or not you want to be. Every time my family walks out the door, we’re being evaluated, and we frequently fail to meet Russian standards. It turns out we disagree on bigger issues than whether sour cream is an acceptable sauce for vegetables. Here are some of the ways to parent like a Russian:

Get the week’s most essential parenting news, without any of the boring obvious stuff, in the Time for Parents newsletter. Sign up here.

There’s No Such Thing as Overdressed: Woe unto the American parent who lets her small child go out in shorts and a t-shirt on a breezy mid-60s day. You will get scolded by a babushka or two as you make your way around town. The way I figure it, if my kid is cold, she’ll put on a sweater. If not, she won’t. Her choice, right?

Not according to Russians, who bundle their children up against the cold before the rest of us have even registered the change in seasons. My Russian friends all insist that if you don’t dress warmly, you’ll catch a cold. So their children wear snowcaps to school while mine are still in their summer shorts.

Don’t Freeze Your Eggs, Freeze Your Babies: Russians have an unusual relationship with the cold. Here in Moscow, don’t ask for a cold drink on a cold day. And don’t ever sit on a cold stone step. These things are just plain dangerous, and you shouldn’t need to ask why. (In case you do: if you do the former, you’ll get sick. Doing the latter will freeze your ovaries.) Yet tiny Russian babies are routinely dressed in snowsuits, placed in strollers, and then put outside by themselves on porches and balconies to nap, even on the coldest winter days. They need fresh air, you see, so their parents bundle them up against the elements and plop them outside to breathe it all in.

When asked why they do this, my friends shrug and reply: it’s tradition. My American friends are always looking for ways to do things better, differently. My Russian friends are more often content to do things the way they’ve always been done. They’ve been dealing with cold for 1000 years, so maybe they know something.

Dance Like Everyone is Watching My daughters wanted to put on frilly pink tutus and spin in circles during ballet class. Their Russian ballet teacher had other plans, including leg lifts, stomach crunches and forced stretching. He told them—and the other students, all under the age of 8—not to eat before class, because it made their stomach stick out and it “doesn’t look nice.” It didn’t take long for my girls to realize ballet wasn’t all fun and games. They quit. The Russian students weren’t given that option.

Again, there’s the tradition: children study ballet because everyone else is taking ballet, and they always have. Americans tend to believe that we rule the world in pop culture; we take pride in leading the way in cinema and music. Russians take pride in their past—they teach their children about the artists and writers who are part of their cultural heritage. They want their children to grow up well-versed in ballet and other outward signifiers of culture, such as poetry, theater and music.

Even preschool-aged children are expected to be able to sit through full-length theater performances, many of which are high-quality productions tailored specifically to children. We took our children to a puppet theater one night and were surprised to find a full house—at 7pm on a school night. Parents brought their children, dressed in their fanciest outfits, beribboned or wearing neckties (Rule 1 applies in more ways than one, apparently), because good theater is more important to them than a regular bedtime routine.

Bedtime? What’s Bedtime? And speaking of bedtime: Russian children go to bed late. A colleague of mine told me her 3-year-old stays up past 11p.m. each night, making up for it with a two-hour nap each day at detskii sad —Russian kindergarten. “You Americans get time to yourselves after your kids go to bed,” she told me wistfully. “By the time my kids go to bed, there’s only enough time to do some housework before I fall asleep.”

The late bedtime applies to children of all ages. Russian elementary students at my kids’ school often get home after 10p.m. – they’re kept busy with after-school language classes and sports until late in the evening. And they’re still expected to finish all of their homework before they go to bed. Russians prize education, not as a means to an end, but as the end itself. And frankly, I think they’re a little bit intimidated by the teachers. Teachers are typically held in high regard here, and no parent wants to get summoned to the school because their kid isn’t doing the work.

Parenting is a Group Activity Just hop on the Moscow metro and you’ll see it in action. As a pregnant mom of a toddler back in Washington D.C., I could count on one hand the number of times someone offered me or my child a seat on the metro. Here in Moscow, no child will ever have to stand on a subway car—every adult in the car will move to make space for children (and their moms). That’s the positive side of the Russian village.

The downside? If a babushka, a Russian grandma, sees you or your kids doing something she doesn’t like, she won’t hesitate to tell you exactly what she thinks of your parenting. She’ll chew you out as loudly as she can, right there in front of everyone else in the station. That’s when I opt out of the village, smiling broadly like the foreigner I am, pretending I don’t understand a word she’s saying to me.

We American parents second-guess ourselves constantly, always making adjustments on the fly. Sometimes I think it’d be nice to make more decisions based on the way my parents and their parents did things. Here in Moscow, though, I’m making up my own traditions, stealing some ideas from my own childhood, going with my gut at other times, and borrowing just enough from Russian parents to keep me safely within the boundaries of my new village.

Donna Scaramastra Gorman is the author of Am I Going to Starve to Death?: A Survival Guide for the Foreign Service Spouse. She, her husband and their four kids have been posted in Russia, Armenia, Kazakhstan, China, Jordan and the U.S. They are currently living in Moscow. 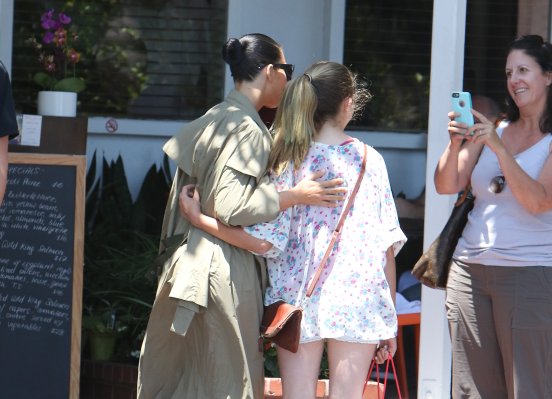 Why You Should Get Your Kids to Act Like Their Own Publicists
Next Up: Editor's Pick