Pope Francis Calls for U.S. Congress to Be Better

By Elizabeth Dias and Michael Scherer

Servants of God have always tended to the least among us, the sick and infirm, the poor and helpless, the wretched. At their best, they bring a clear terrestrial purpose to their ministry, to give hope to the hopeless and help humanity work better for itself. So when Pope Francis entered the U.S. Congress Thursday, coming before the most wretched institution in American life, he had his work cut out for him.

No organized group is more hated, less functional and more riven by base instinct and petty rivalries than the men and women who assembled before him. As the Pope departed for his trip to the Americas, Arizona Republican Rep. Paul Gosar, who is Catholic, announced he would boycott the speech, refusing even to pay the most basic respect of listening, because the Pope might express concern over global warming. No one paid Gosar much mind, because this sort of thing happens all the time in Congress. These are days when outrage, no matter how outrageous, is rewarded as courage.

To this pettiness, Francis had an answer, as simple as it was powerful. Congress, and by extension the American people, must reflect, understand and move beyond its own limitations. “Each son or daughter of a given country has a mission, a personal and social responsibility,” he began, before the assembled elected leadership of the nation. “Your own responsibility as members of Congress is to enable this country, by your legislative activity, to grow as a nation.”

Read More: Why I Am Boycotting Pope Francis’ Address to Congress

From there, he showed a way out of the darkness. He used the word “dialogue” no less than 13 times, and three times implored the Congress to come “together.” “We need to face them together,” he said of the problems of the young, “to talk about them and to seek effective solutions rather than getting bogged down in discussions.” Instead of dogma, he called for “a spirit of openness and pragmatism.” Instead of division, he asked for unity.

“There is another temptation which we must especially guard against: the simplistic reductionism which sees only good or evil; or, if you will, the righteous and sinners,” he said. “The contemporary world, with its open wounds which affect so many of our brothers and sisters, demands that we confront every form of polarization which would divide it into these two camps. We know that in the attempt to be freed of the enemy without, we can be tempted to feed the enemy within.”

There were issues of political import to be sure. He did mention the dangers of a warming planet, and the need respect immigrants and to do more to care for the poor and elderly. His praise of community echoed Democratic talking points more than Republican ones, and his spirited condemnation of the death penalty contrasted with his passing defense of unborn life. Of the four Americans that he praised, two were former leaders of the left, civil rights activist Martin Luther King Jr. and labor organizer Dorothy Day. One was a mystic, Thomas Merton, who called the nation to improve its own spirit. And the last was the President, Abraham Lincoln, who held the nation together at its darkest hour.

Read More: These Are Some of the Top Catholic Lawmakers in U.S.

“A nation can be considered great when it defends liberty as Lincoln did, when it fosters a culture which enables people to ‘dream’ of full rights for all their brothers and sisters, as Martin Luther King sought to do,” Francis said, “when it strives for justice and the cause of the oppressed, as Dorothy Day did by her tireless work, the fruit of a faith which becomes dialogue and sows peace in the contemplative style of Thomas Merton.”

But his reception was overwhelmingly positive. He entered to united cheers from both sides of the assembled chamber, only later to get the divided reaction of partisan cheers for which Americans have long been accostomed. Vice President Joe Biden and Speaker John Boehner, both Catholic, broke with the usual protocol to reach out and shake his hand before the speech. Senators could be seen snapping pictures as Francis entered the hall with their cell phones, while Cardinal Pietro Parolin, the Vatican’s Secretary of State, chatted with Senators who appeared not immediately to recognize him.

The assembled lawmakers listened attentively as the Pope, speaking slowly with a heavy Argentine accent, laid out his mission for them. “Politics is, instead, an expression of our compelling need to live as one,” he said, “in order to build as one the greatest common good: that of a community which sacrifices particular interests in order to share, in justice and peace, its goods, its interests, its social life.”

In all this, Rep. Gosar’s fear that the Latin American Pope would preach socialism to the chamber was revealed not as providential, but as small and cynical. If anything, Gosar was the target of Francis’s address, the representative of a hard-headed ideology that the Pope hoped to crack, the embodiment of a man who had succumb to the “enemy within.”

America was founded on a separation of church and state, but not on the idea that one could thrive without the other. That, in the end, was the message of Pope Francis: The true message of God is greater than the things we think divide us. 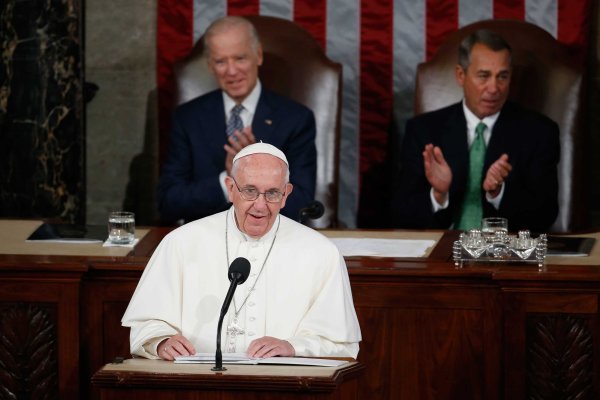 Read the Speech Pope Francis Gave to Congress
Next Up: Editor's Pick