Watch An Astronaut Give Himself a Flu Shot in Space

There’s no telling exactly how many Americans will get their recommended flu vaccines this year, but considering the 147.8 million doses that were distributed last season, the number should be pretty high. So it’s hard to get worked up at the sight of a single person getting a single shot—unless that person is one of the only two Americans off the planet entirely, orbiting 250 miles overhead aboard the International Space Station. In the case of that vaccination, there is a lot of important science at stake.

The astronaut who just got his shot is Scott Kelly, who is midway through a full year away from the planet. In space, the immune system can grow far less effective than it is on Earth. Away from the swirl of pathogens it encounters every day on terra firma, it can “unlearn” the immunities it had previously known, as Dr. Emmanuel Mignot of Stanford University, a mission scientist for the year in space project, puts it. “The immune system needs to be challenged,” he explains.

That can mean trouble when you’re floating in an enclosed space station. While the controlled environment of a spacecraft may reduce the chances of a flu or other infection getting loose, on the off chance an astronaut did carry up a bug from Earth, it could have a severe impact on the entire, immunocompromised crew. Such a scenario would be bad enough when the astronauts are in low Earth orbit and only hours away from coming home. An on-board epidemic during a deep space mission to Mars or elsewhere could be even more dangerous. And there’s no certainty about how well the crews’ immune systems will regain their strength when they do return from space.

To determine how best to inoculate astronauts against illness, and to study the function of the immune system in general, Kelly and his twin brother Mark, a retired astronaut who remains on Earth, are participating in a three-cycle flu vaccine experiment. Their first shot was last year; the second was Sept. 24 for Scott and is scheduled for a week later for Mark; and the third is a year from now, which will be more than six months after Scott returns.

In all three cases, blood samples from the two men are collected about one week after the inoculation, when the immune system has mustered its most robust reaction, and antibodies and other immune elements should be at their highest levels. Mark’s samples are easy enough to send out to the lab. Scott’s must be spun down in space to separate the various blood components, then frozen and sent back to Earth with a returning crew aboard a Soyuz spacecraft. When the spaceship thumps down in Kazakhstan, the samples are flown by Lear jet to Houston—a 24-hr. trip from orbit to east Texas.

Space may be fun, but the health risks are real. The Kelly brothers are doing their part to protect the most complex machine on any crewed mission: the human body.

Related: TIME is producing a series of documentary films about the yearlong mission. Watch them here: A Year in Space 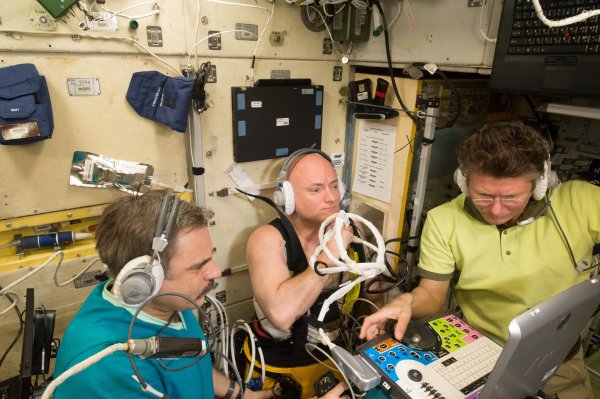 Halfway Through a Year in Space: How the Science Gets Done
Next Up: Editor's Pick