Pope Francis greets and blesses seminarians, novices, religious guests inside the Basilica of the National Shrine of the Immaculate Conception in Washington, on Sept. 23, 2015.
Jim Bourg—Reuters
By Tessa Berenson

Members of Congress had a big decision to make when it came to Pope Francis’ speech Thursday: who to invite.

Representatives had 50 tickets to give for viewing the address on the Capitol lawn and Senators had 200, but each member of Congress had just one extra ticket for seating in the Gallery.

Many members of Congress gave that ticket to their spouse or another family member. “It was not a hard de­cision. It would have cost me a mar­riage if I would not have giv­en it to her,” Sen. Jon Test­er of Montana joked to the National Journal of giving the ticket to his wife Sharla.

Others gave their ticket to faith leaders from their state or district. California Sen. Barbara Boxer and New York Sen. Kirsten Gillibrand, for example, both invited nuns from their home states.

But a few lawmakers broke the mold with their invites. These are some members of Congress with interesting invites to see Pope Francis speak:

Four other 2016 candidates will be in attendance at the speech because they are members of Congress: Florida Sen. Marco Rubio, Texas Sen. Ted Cruz, Kentucky Sen. Rand Paul, and Vermont Sen. Bernie Sanders.

Vice President Joe Biden and his wife will also be attending the speech. Biden will sit beside Boehner behind Pope Francis. 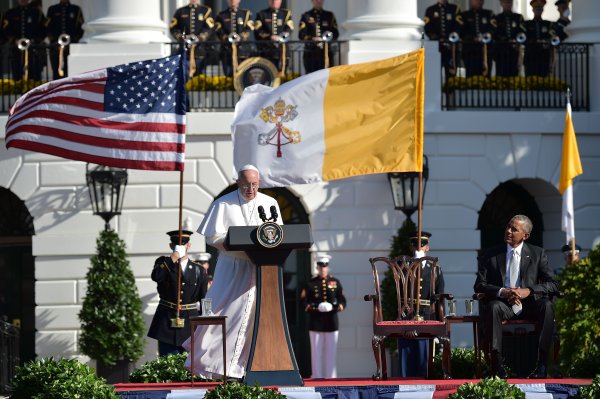 Watch Live as Pope Francis Meets With the Homeless in Washington, D.C.
Next Up: Editor's Pick