These days, when someone’s chocolate bar has been pilfered or a brand-new eyeliner has been left to dry out, there’s not much doubt as to who did it. It’s either me or my younger daughter. Just a month ago, such accusations could be thrown into a stew of three females in one house, leaving just enough ambiguity that there was always a shade of doubt. Now my older girl is at college, and so a new kind of involuntary transparency is the rule. Of the two of us who remain, one is clearly guilty, and we both know who we are.

As the dust accumulates in that empty third bedroom, there’s a readjustment going on between me and my 14-year-old, formerly known as the second child. We are re-creating our relationship bit by bit. We look at each other over breakfast or in the store or on the road with a mixture of wonder and familiarity. Without her sister as a foil or as a comparison, my younger daughter looks impossibly older, perilously close to leaving home herself. The house feels big. There’s more space to be apart yet more opportunity to be together. We are both quietly, constantly reassembling the molecules of this family.

The last time I felt this alone with her was the night she was born. All the visitors had gone home, and it was just us, side by side, watchful, exhausted and yet not sleeping. It was the night before Mother’s Day, and I was pretty smug about the whole motherhood thing. I thought because I’d raised one girl to age 4, I’d know what I was doing with the second one. Oh, how wrong I was.

I took that baby home to her older sister, and it was like adding some combustible element to our family. The new girl was so radically different from her sister that her dad and I had to recalculate our parental expectations daily like a frantic GPS. The little one was hyperaware of everything, while her sister could disappear into her toys or her own mind, oblivious to everything around her. I’d have to shout at the single-minded older child to get her attention when she was on the verge of running into a herd of bicyclists at the park or in danger of slipping under someone’s feet at the swings. The first time I yelled like that with the younger girl, she collapsed in tears. Like most siblings, they were just calibrated differently, leaving us parents to keep up, to try to be the right kind of mother or father for each child at the right moment.

By the time the younger was 3, she was like the neighborhood mayor. She knew all the cashiers at the grocery store by name. “Miriam, I love your earrings,” she’d say, and her older sister would roll her eyes and go back to her book, determined not to compete. Later, one would play Lady Macbeth in middle school, and the other one was a stage manager and director in high school. Complementary sides of a familial coin, they fought, they laughed, they made up their own skits, and they had their own language, one often used to mock their parents. Over time they became a new compound, a unique entity separate from us. Sisters. And when their dad and I divorced, they held on to each other like soldiers in a storm as they switched houses.

They are now profoundly different yet shaped by each other. And I’m shaped by them. I’ve pursued that futile quest to be fair, to distribute attention equally. Now it’s disorienting to let one go and have more for the other. The younger one is navigating this new terrain warily. Her sister still sets the course, is still first to leave home, to choose a college. But day to day, the younger one no longer has the sibling against whom she has measured herself all her life. She can stretch her long legs, take up the whole sofa, take all the blame for whatever mess has been made and all the credit for making me laugh. She also gets to tease me in her own way, and I her. We’re developing our own vocabulary, our own dyad. My older girl is creating a new version of herself at college. One I haven’t met yet. I see it in her texts, hear it in her voice on the phone.

I know both will keep evolving. With any luck, they’ll come home with new partners, with children, with experiences I can’t match, problems I can’t help them solve, victories I had nothing to do with. They will learn that they are different people at work than they are with their friends or with me. They’ll learn that we’re all constantly recombining the molecules of who we are to ourselves and to each other. And like most things, these are lessons that they will have learned first with each other. They are each other’s teachers after all. And mine too. 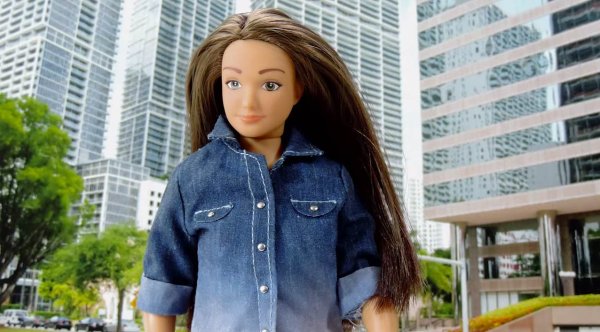 Society Needs 'Normal Barbie' Who Gets Her Period
Next Up: Editor's Pick