On her third album, out now, Del Rey is still pop’s most polarizing flower child
Getty Images
By Nolan Feeney

Following the tide of public opinion on Lana Del Rey could give anybody whiplash. In 2011 she became a legitimate Internet sensation on the strength of her brooding piano ballad “Video Games.” A few months later she was a lightning rod for debates about “authenticity” after listeners learned that the Lana Del Rey character was just the latest musical identity of singer-songwriter Elizabeth Grant. Critics slammed the “gangsta Nancy Sinatra” aesthetic of her 2012 major-label debut, Born to Die, but two years later the follow-up, Ultraviolence–a swirling storm of ’60s psychedelia produced by the Black Keys’ Dan Auerbach–appeared on many publications’ best-of-2014 lists (including TIME’s).

Her third LP, Honeymoon, swings back toward the film noir inspirations of her early material. These sparse, sulking ballads draw from her acclaimed work on the Big Eyes and Great Gatsby soundtracks, but the ambience is often stronger than the songwriting, and several tracks languish at the five-minute mark. The songs could take a lesson from Instagram–applying a nostalgic filter isn’t always enough to make great art. Yet Del Rey is unapologetic here, doubling down on her obsession with old Hollywood, tortured relationships and glamorous depictions of vice. On Ultraviolence a few winks of self-awareness suggested that there was satire at play in her performance of misery, or that she was at least in on the joke. On Honeymoon’s most trolling moments–she shoots down a paparazzo’s helicopter with a bazooka in the video for “High by the Beach”–Del Rey puts the joke on you for demanding more from her shtick after all that scrutiny. “We both know that it’s not fashionable to love me,” she sings on the title track. On this album, she’s given up on persuading you to. 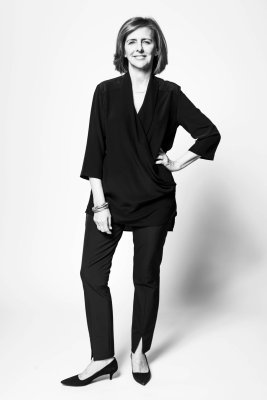 7 Questions With Nancy Meyers
Next Up: Editor's Pick