In a video that seems straight out of the movie Ted, Michael Bergin, from Malden, Mass., freaks out and curses after every other word in a very thick Boston accent. The reason? Well, he thinks he has spotted a baby whale while on his friend Jason “Jay” Foster’s boat in Boston Harbor. Or maybe a flounder. Or a tuna. Either way, he wants to do something about it.

“That thing looks dead, man, we gotta call the aquarium or something, dude,” he says in the video below, which, again, has a lot of profanity:

The New England Aquarium issued a statement clarifying that the “sea monstah” looks like an ocean sunfish (Mola mola), poses no threat to humans and tends to stay close to the water’s surface, behavior that scientists believe allows it to “thermoregulate” by letting “seabirds to pluck off parasites.” 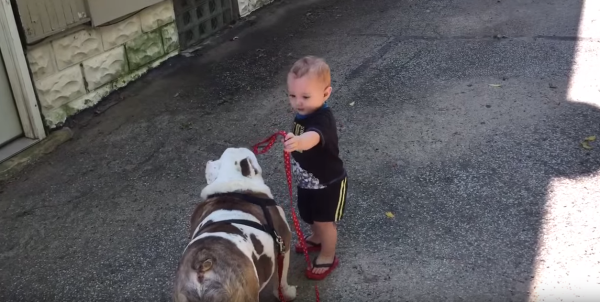 Watch a Baby Try to Take a Very Large Bulldog for a Walk
Next Up: Editor's Pick