TEHRAN – The golden dome and minarets can be seen from miles away, signposts point the direction from all sides and wide boulevards lead up to the many gates of the mausoleum of Ayatollah Seyed Rouhollah Khomeini, which is always open for the visitors and mourners who come from all over Iran and even the world. Khomeini, the late founder of the Islamic Republic, was famed for his austere lifestyle and unappeasable defiance of materialistic ideologies. Yet as visitors enter the grandiose main chamber, there is little sign of the simple and modest way of life that had made Khomeini famous as the Imam of the oppressed. Glittering chandeliers light the hall which is covered with luxuriant Persian carpets. Marble columns tower over the breathtakingly adorned tomb, and inlaid ornamental tiles adorn the decorated walls and soaring roofs.

For many of those faithful to the ideals of the 1979 Islamic Revolution, this magnificent mausoleum is irreconcilable with the modest and small home Khomeini lived in even after becoming the supreme leader of the Islamic Republic of Iran, and the simple hall with brick walls where he preached his fiery sermons against world powers and materialistic ideologies to his millions of followers. But the mausoleum, completed in May 26 years after Khomeini’s death, is just the latest example of the tectonic transformation, in appearance at least, of the Iran of today with the country born out of the Islamic Revolution.

That revolution was rooted in Iranian and Islamic morals and principles that held modesty and unpretentiousness in the highest regard. After 1979, these expectations took on the form of social rules, to the degree that wealth and affluence was eyed with suspicion and poverty and destitution was exalted as signs of piety. From clothing to cars to homes, simplicity and humbleness were the order of the day—and anyone not adhering to this stereotype could find themselves shunned or even named as an enemy of the revolution.

More than 35 years later, however, things could hardly be more different in Iran. Clothes from Western designers are in fashion not just for the well-off but for members of the middle class, who will save for months to buy the right outfit. Luxury cars, ranging from Porsches to Lamborghinis, can be found on the streets of Tehran, in spite of high import tariffs. Many Iranians now work up huge debts to buy state of the art appliances ranging from huge widescreen TVs to side-by-side refrigerators produced by foreign brands like Sony or Samsung.

The ancient bazaars are being phased out in place of modern shopping complexes offering the latest goods from clothes to smart phones in major cities all over Iran. Whole blocks are being pulled down to build huge shopping malls, unheard of until recently in Iran. A new term, ‘Ahanparasti’, has been coined in Tehran, that literally means “worshipping iron,” and is being used to describe youth whose only consideration for choosing dates and prospective future spouses is their model of car and expensive personal accessories.

And the change is not just in shopping habits. Iranian culture and revolutionary values demanded that youth live and behave chastely and virtuously, and any behavior that reflected badly on their family’s honor would be severely punished by the family itself. But now the state has had to resort to the morality police who patrol the streets to enforce a minimum of Islamic covering—or hijab—for women. Dating, which is technically still illegal, has become so widespread that Iran’s ministry of education reports 40% of teenagers begin dating as young as 14. While a generation ago many married couples had only met through their families, cohabiting couples, known as white marriage here, are now on the rise in spite of official denunciation.

Even artistic tastes have also undergone significant changes. While many concerts by traditional Iranian musicians play to half empty seats, the revived Tehran Symphonic Orchestra, disbanded for years following the Islamic Revolution, played Western Beethoven’s Symphony No. 9 to sold-out audiences this spring and summer.

The orchestra’s conductor Ali Rahbari, who had left Iran 40 years ago before returning last year, told TIME about his surprise at seeing a new generation of homegrown classical musicians who seemed to have sprung from nowhere. “When I was a kid I would be booed by more traditionally religious people when I walked to classes with my violin, he said. “But now I see many musicians in their late teens and early twenties whose family have invested heavily in their training, it is exceptional.”

A top political strategist, Amir Mohebbian, believes the growth of a new generation of Iranians is the main cause behind these changes in social behavior. “Unfortunately the general orientation of the growth of society has not been in favor of the revolutionary forces,” he says. “The new segments of society that have come to exist are not pro-revolutionary—however they are also not anti-revolutionary.” He says that young people still accept the state and the revolution, but they also want a degree of individual control over their lives.“Individualism and utilitarianism have spread widely in our society, these are at odds with the core values of our society, they are Western in origin.”

Not everyone agrees. Abdullah Ganji, the managing director of Javan Daily, a publication dedicated to the ideals of the Islamic Revolution, says that in the balance the number of youth who are devoted to Islamic principles has risen sharply in comparison to the early days of the revolution, “This year 450,000 university students signed up for participating in religious ceremonies, much more than universities could actually accommodate. Half a million signed up for the tours of the [Iran-Iraq] war fronts. Every week millions in Iran take part in Friday Prayers.” Ganji argues that the way people dress or behave has less to do with their beliefs than with the fact that they were not provided with appropriate models. Young Iranians have an Islamic identity but a “Western exterior.”

Mohebbian agrees that the state has told Iranians what they can’t do, but not what they should. “The Islamic Republic has throughout its history always had a clear and strong position on what it deems unacceptable, but it has never got round to defining what it exactly stands for when it comes to the day to day life of normal citizens,” he says. “That’s because the republic has always been stuck in an emergency state under constant threat or actual attack from its numerous and powerful enemies.”

But now, after the nuclear deal between Iran and P5+1 world powers was reached this year, and with the tangible possibility of a détente with its arch enemy the United States, Mohebbian believes this could be about to change. “In this new atmosphere, without the emergency state and all of its consequences, the state will begin negotiating with the people, just like it did with the world powers,” he says. “Where should it hold firm, where should it relax its grip, in general finding the saddle-point in the relationship between the state and the nation. We have made great claims on what we want an Islamic revolutionary republic to look and feel like, but until now we have sidestepped the questions that would have forced us to describe that in detail. Now we have to answer them and this will be extremely difficult and demanding.”

Iran’s extreme youth matters here. 60% of the Iranian population are under 35 and have no firsthand experience of the 1979 revolution. Their goals in life are markedly in contrast with the ideals that led their parents to overthrow the monarchy. For many of these youth finding jobs that can support the upward mobility they desire matters more than thwarting social injustice. Being connected to the world and benefiting from what it has to offer is more desirable than facing off with world powers. And enjoying life is of a higher priority than revolutionary ambitions. “Social demands flow ceaselessly, and obstructing them will cause an explosion,” says Mohebbian. “We must answer these questions not suppress them. To do so we must keep our ideals but gradually change from a revolution into an evolution.” 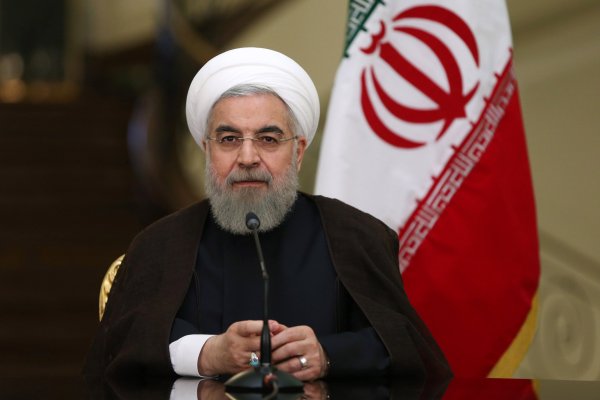