In Washington, D.C., the arrival of a foreign leader is typically more the occasion for irritation, as a presidential motorcade or security detail ties up traffic. But the jaded residents of the nation’s capital could not contain their excitement over a visit by Pope Francis.

Onlookers filled the blocks and corners of downtown Washington, smartphones at the ready, hoping to catch a glimpse of the pontiff.

The sea of faces eager to wave at the Holy Father’s motorcade, snap a photo—or, if they’d be so lucky, receive a blessing—were as colorful and varied as the nation itself, but they shared a similar wish that the Pope leave behind a message of love and inclusion.

Along Constitution Avenue, the Pope greeted thousands who had lined up along his abbreviated parade route for hours to welcome him to the U.S. He even stopped to kiss a baby on the forehead, leading the crowd to erupt in cheers and praise.

Miguel Vera, 38, traveled to D.C. from North Carolina to greet the pope during his historic visit with his 3-year-old daughter, who slept on his shoulder as they stood along Constitution waiting for the Pope to pass by. Like many others in the crowd, Vera is a Catholic but his South American roots add to his connection with the Pope.

“The Pope brings such hope to our church and it’s an exciting time,” Servino said. “I’m most excited for the Pope to see the American Catholic Church and how alive and excited we are. Though there may be divisions and disagreements, on days like today we can come together and celebrate.”

Not all were lucky enough to make it through the security checkpoints in time to line up along the route. On 18th Street Northwest, a full block away from the papal motorcade, people snapped grainy pics through the towering gates erected by the city and cheered as the pope passed by.

Siying Li, 23, and Katie Gach, 28, friends and former classmates at Georgetown University, traveled to the National Mall to take in the sights and sounds of the days’ events. They peered through barricades along the mall in the direction of the Pope’s motorcade though their view was pretty obstructed.

“I love the energy surrounding the whole visit. I just wanted to see other peoples reaction to it,” said Gach. Though Gach is Protestant, she admires his effort to promote the teachings of Jesus rather than simply spread Catholicism.

Read More: Why Immigration Is Different for Pope Francis

“He understands that not everyone is going to follow the Catholic Church, but he’s open to sharing his message of love and compassion and caring for community to everyone,” Gach said.

As the Pope exited the White House complex to attend a meeting with U.S. Bishops at the Cathedral of St. Matthew the Apostle, one could follow the motorcade simply by listening out for an eruption of cheers on any given street. Along the blocks peppered with both Washingtonians weaving in and out of office buildings and Pope fans waving flags and holding signs an array of Pope swag—from buttons to commemorative t-shirts to newspapers—was up for sale.

Among the buyers was Roberto de la Rocha, a Guatemalan immigrant who came to U.S. 10 years ago. As an immigrant, de la Rocha says he received a lot of help from Catholic charities as he got himself together. On Wednesday, he joined the crowd of onlookers as a legal resident eager to bring gear back to family members back home. De la Rocha clutched a blue bag full of t-shirts, flags, and stickers he’d bought from various street vendors to show his family in Guatemala, who is Catholic, what he did in America.

The excitement was palpable across the District. The sound of sirens in the distance was enough to lead gaggles of people on downtown streets to gaze upward, grab their phones and hope.

-with reporting by Tessa Berenson and Daniel White 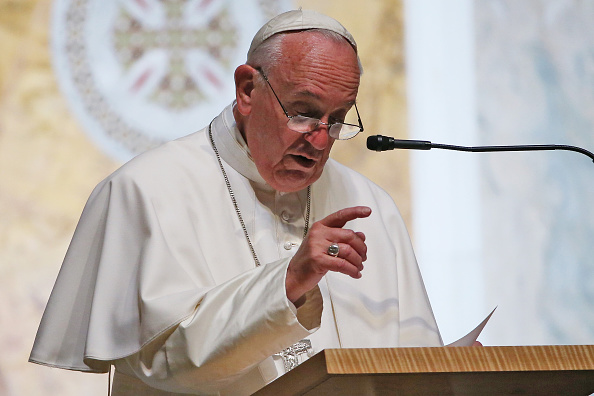 Why Immigration Is Different for Pope Francis
Next Up: Editor's Pick