Roman Oben: What My Mom Taught Me About Football

Roman Oben is a former NFL player and the NFL’s Director of Youth and High School Football.

I owe the start of my football career to a move I learned from a soap opera.

The summer before 10th grade, I was determined to play high school football. The only thing that stood in the way of me stepping onto the field was a consent form. It needed my mom’s signature, and she didn’t approve.

As the cut-off date for interested student athletes approached, I got desperate. That’s when, of all things, an episode of General Hospital popped into my head. In the episode, one of the characters traces over a signed check with a piece of paper to replicate a signature. So that’s exactly what I did to gain entry into the world of football.

Now, as the NFL’s Director of Youth and High School Football, I often find myself reflecting on the well-intentioned forgery that began my career playing the game I love. After 12 years as an offensive tackle in the NFL and one Super Bowl championship, I see that my mom and her understanding are at the heart of my relationship with football. She’s helped me stare down some of the most intimidating, driven athletes on the planet, but before all of that, she was the one that intimidated me the most.

I had wanted to play football since moving to Washington, D.C., from Cameroon—there was something mesmerizing about the sport. Before I ever stepped onto a football field, I admired the strategy and athleticism of the game. Every Redskins game I saw on TV was a gripping battle, which led to a love for the 1980s Redskins teams. One of my first jobs in high school was selling concessions at RFK Stadium so that I could be close to the action.

Of course, my mom didn’t quite see football the same way I did.

She was a single parent raising me in an urban area in D.C. during the ‘80s. A stern yet loving woman, my mom instilled in me a deep sense of responsibility and hard work, things she had learned growing up in Cameroon.

I can still hear what she would tell me when I’d ask her about playing football: Roman, you need to continue focusing on your academics; Roman, we didn’t leave Cameroon just for you to come to the United States and become an athlete. These were the words that haunted me when I forged her signature to join my high school team.

It wasn’t long before my mom found out that I had joined the team. I’m convinced that she, like most moms, possesses some kind of built-in lie detection that allowed her to see through my deception. She was disappointed that I’d lied, but she didn’t stop me from playing.

Half of my first high school season passed before I was finally able to convince her to come to a game by assuring her that those who oversaw the football program prioritized player safety. She sat on the bleachers watching on the edge of her seat. This game was nothing like the football she was accustomed to back home in Cameroon, the sport we call “soccer.” Yet she couldn’t look away.

At one point during that first game, a player on the other team and I got into a shouting match over something he said about our quarterback. As we nudged each other back and forth, I heard my mom call from the stands: “Hands off my boy!” That moment has stayed with me for more than 20 years.

It was then that I knew my mom saw football the same way that I did. Her attitude started to change. She realized that playing football was good for me. She saw that football is what allowed me to grow as a person both on and off the field. Seeing me stand my ground on the field during that first game she attended washed away a lot of her worries.

When I asked why her attitude toward football had changed since I first started playing, she told me it was because of faith. Faith in God to protect me. Faith in my coaches to instruct me. And faith in me to grow as the person she raised me to be.

She’s often made the analogy that you don’t avoid driving in your car just because accidents happen. You don’t get into a car thinking, how am I going to avoid a crash? You wear your seatbelt. You obey the signals and rules. You trust the system. It’s the same thing with football. You listen to the coaches. You trust the training you received and the time you dedicated to learning the proper and safest ways to play the game. You trust the well-trained medical staff on the sidelines, and you trust your fellow teammates and peers.

When I speak to worried parents now, I tell them what my mom tells me: Parents should let their children pursue their passions so that they can reach their fullest potential.

My mom watched me go from barely being able to put on my pads to becoming a Washington Post All-Met athlete within a year. Soon, letters from interested colleges began to roll in, and I remember many nights of long discussions as to what school I should attend. She was also there for me when I was drafted by my first NFL team, the New York Giants. During my playing career, my mom went to every game of mine that she could. She encouraged me to keep learning and growing, both on and off the field.

She still watches the pros play every chance she gets, scribbling down things in her notepad that stick out to her in almost every play. “Roman,” she’ll say, “his form was way off—he didn’t bend his knees or use his hands!” Now when we catch up over the phone or in person, we spend half the time talking about whatever game was on the night before.

My mom is eternally my fiercest advocate, a woman who has taught me invaluable lessons since I was born. She has taught me to run at challenges rather than away from them and stay strong in moments of adversity. Football provided me the opportunity to apply these lessons—my mom is the reason I knew to hold my head up when being booed by 80,000 people at a rival stadium or form a friendship with a teammate who had never played with African Americans before.

My mom has been more than just a mother to me. She is my friend, my supporter, and one of my biggest fans. 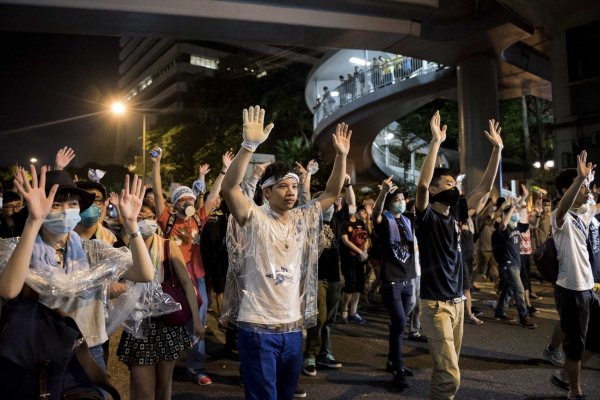 Self-Determination Is the Answer For Hong Kong
Next Up: Editor's Pick