In a particularly poetic passage of a speech at the Cathedral of St. Matthew the Apostle, the pontiff noted that his native Argentina—like America—received the Gospel from missionaries.

“I am a native of a land which is also vast, with great open ranges, a land which, like your own, received the faith from itinerant missionaries,” he said. “I too know how hard it is to sow the Gospel among people from different worlds, with hearts often hardened by the trials of a lengthy journey.” He then argued that they should rely on the “epic struggle of the pioneers and the homely wisdom and endurance of the settlers.”

“As one of your poets has put it, ‘strong and tireless wings’ combined with the wisdom of one who ‘knows the mountains,'” he added.

The poet in question is Edgar Lee Masters, from President Obama’s home state of Illinois. An attorney and author who lived in the first part of the 20th century, Masters published 21 books of poetry, but his Spoon River Anthology, published in 1915, is considered his masterpiece.

The book is essentially a sort of poetic counterpart of Thornton Wilder’s play Our Town and Sherwood Anderson’s novel Winesburg, Ohio, featuring a cast of characters from a small town narrating their own lives after their deaths.

Like others in the series, the poem in question, “Alexander Throckmorton,” is a lament for missed opportunities.

Masters is hardly a religious poet, with one poem in the series featuring a blasphemer who was locked up and “beaten to death by a Catholic guard.” But Francis, who cited a Muslim mystic in his climate change encyclical, has never been afraid to read or quote from a wide range of writers.

Read Next: Meet the Muslim Mystic Pope Francis Cited in His Encyclical 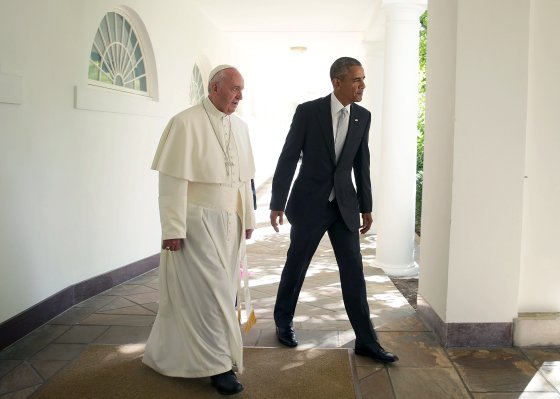