Pope Francis introduced himself to the United States with a brief speech that confounded the left-right divide in American politics, urging Americans to come together to make the world a better place.

In a scant 600 words, the pontiff thanked the 15,000 people assembled on the South Lawn of the White House for a warm welcome and urged them to work together on several difficult and divisive issues, including ones dear to both conservatives and liberals.

For the left, he began by noting that he was the son of “an immigrant family” and that America was “largely built by such families,” remarks that come at a time when immigration is a hot topic in U.S. politics. He also obliquely endorsed the multilateral approach to foreign policy behind the rapprochement with Cuba and the Iran nuclear deal, although he did not name either.

Read More: Here is the Song Everyone is Playing for Pope Francis

For the right, he made clear that he views religious liberty as an important part of American freedoms, arguing that U.S. bishops must be vigilant to “preserve and defend that freedom from everything that would threaten or compromise it.” And he argued for supporting the institution of marriage and the family.

In one striking moment, Pope Francis departed from his broader talk of principles to specifically endorse one of President Obama’s signature second-term achievements: a clean energy plan designed to reduce power plant emissions by roughly a third by 2030.

“Mr. President, I find it encouraging that you are proposing an initiative for reducing air pollution,” he said. “Accepting the urgency, it seems clear to me also that climate change is a problem which can no longer be left to a future generation.”

Francis then quoted from his encyclical on the environment, Laudato Si’, which calls for “a sustainable and integral development” to alleviate poverty while also protecting the environment.

In a deft display of familiarity with American politics, Francis then alluded to a lesser-quoted section of Martin Luther King’s “I Have a Dream” speech, given at the opposite end of the National Mall more than a half-century ago.

In that speech, the civil rights leader argued that the Declaration of Independence was like a bounced check written to black Americans, promising them fundamental rights but failing to deliver. Francis extended that logic to economic justice, just as Dr. King did in the twilight of his career, and then to the environment itself.

“Our common home has been part of this group of the excluded which cries out to heaven and which today powerfully strikes our homes, our cities and our societies,” he said. “To use a telling phrase of the Reverend Martin Luther King, we can say that we have defaulted on a promissory note and now is the time to honor it.”

Francis had a welcome audience in the thousands who thronged the White House for the ceremony.

Read More: Here Are the 5 Controversies Over Pope Francis’ Visit

Alexander Kurien, 51, an Indian Orthodox pastor, came at midnight in order to get a good spot. Although he is not Catholic, Kurien said he sees “the reflection of Christ” in Francis and tries to emulate him by not taking any pay. He found particular resonance in Francis’ approach to immigration, a topic of some controversy in the presidential primary underway.

“All this commotion about immigration should not be there,” he said. “This nation is all about immigrants. To see all that wrapped in one person—it’s amazing. This nation, especially Washington has a lot to learn from him.”

Indu Jain, 52, came from Potomac, Maryland, at 2 a.m. to wait to hear the pope speak. A Hindu, she said she appreciated his message, specifically on the topic of climate change.

“Climate change is important for new generations to come, it’s what we will leave for the world,” she said.

In both tone and substance, Francis’ remarks were reminiscent of another speech which introduced a political figure to Americans: Barack Obama’s 2004 Democratic convention speech, which argued that “there’s not a liberal America and a conservative America; there’s the United States of America.”

That speech helped introduce Obama to America as a potential bridge-builder who could cross political divides, a reputation that did not hold up as he got into the actual daily business of politics.

But Pope Francis is aiming to avoid that fate. On the plane ride to the United States, he told reporters that he is not a liberal, although he might say things people think “sounded more left-ish” at times. His only allegiance, Francis stressed, was to Catholic doctrine. 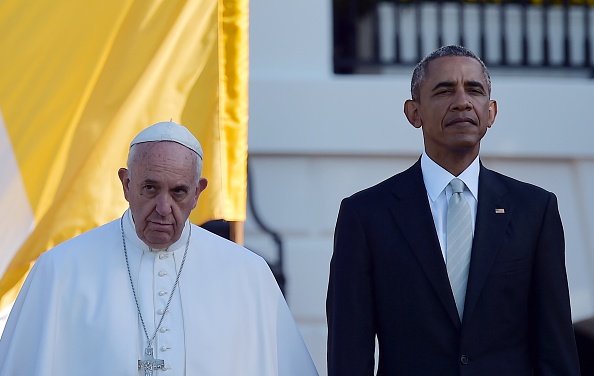 Read the Speech Pope Francis Gave at the White House
Next Up: Editor's Pick