To accompany Chinese President Xi Jinping’s weeklong trip across the U.S., the Chinese state newspaper People’s Daily has released an English-language video featuring a chipper cadre of foreign students in Beijing cheerfully singing the leader’s praises. “Xi Dada,” they call him, which translates roughly to “Daddy Xi” — because, as Papius from Kenya explains, “he is not just a leader; he is like a part of the family.”

Never mind that many in the international press have warily raised their eyebrows at Xi’s authoritative leadership. These kids — all of whom appear to have crawled out of a Tommy Hilfiger ad — can’t get enough of him.

“His face is a little bit cute,” Benedikt from Austria says. Jang Ji-hye from South Korea confesses that if her “future husband is like him, [she] will be happy.” One girl wants us to know that when Xi came to her school, she read him a poem. Many of them invited him home to Spain, or France, or to share a pizza in Chicago.

The three-and-a-half-minute video is set in part to a smooth jazz-polka rendition of “Take Me Home, Country Roads” by John Denver, the bespectacled late folk singer who has always been something of a pop demigod in China. (In the early 1990s, he was one of the first Western artists to tour the country.) 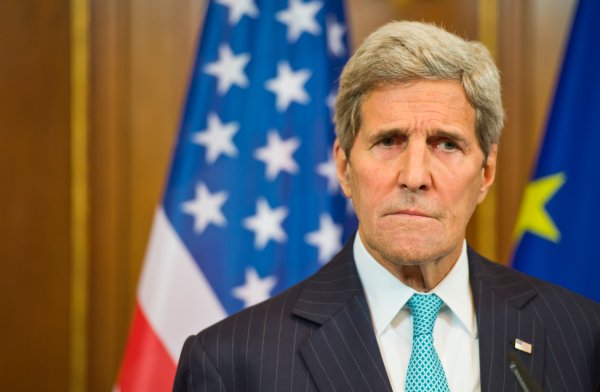 Kerry: Russian Military Buildup in Syria Is Self-Protection
Next Up: Editor's Pick