Though writing a comic book may seem out of step for a man best known for his critically acclaimed new book, Between the World and Me, an ardent letter to his son about race in America, Coates no doubt recognizes the cultural cache comic books now hold. Coates is a national correspondent at The Atlantic, an influencer on Twitter and a National Book Award nominee, but his new position at Marvel might just be his most powerful yet.

The comics themselves command a wide audience, and—more importantly—they serve as source material for the hyper-successful Marvel blockbuster movies like The Avengers. A film based on the Black Panther comic books is planned for 2018, and Chadwick Boseman will make his first appearance as the character in Captain America: Civil War next year.

“I don’t experience the stuff I write about as weighty,” Coates told the New York Times. “I feel a strong need to express something. The writing usually lifts the weight. I expect to be doing the same thing for Marvel.”

Black Panther, the leader of a fictional African land of Wakanda (home to the fictional element Vibranium for those paying attention in Age of Ultron), first emerged on Marvel’s pages in 1966. He has a Ph.D. in physics and has at various points been a member of the Avengers team. Coates will write a year-long storyline for the character dubbed “A Nation Under Our Feet,” with Brian Stelfreeze illustrating. The story will follow Black Panther as he confronts the superhuman terrorist group that set off a violent uprising in his country.

Coates is a self-described comics nerd and has advocated for diversity in the genre. Marvel has been undergoing its own diversity renaissance since Editor-in-Chief Axel Alonso took over in 2011. New characters include a half-black, half-Puerto Rican Spider-Man, a black Captain America and a female Thor. “It was always in the back of my mind that I’d like to see superheroes look like me or look like my son. So I’m always striving to make the next great Mexican superhero,” Alonso told TIME in a recent interview.

In May, Coates interviewed Marvel editor Sana Amanat—who spearheaded Marvel’s efforts to diversify its characters and helped create the popular teenage, female Muslim superhero Ms. Marvel—about promoting women and people of color in comic books. Marvel reached out to him about writing his own comics after that conversation at the New York Ideas seminar.

MORE: Everyone’s a Superhero at Marvel 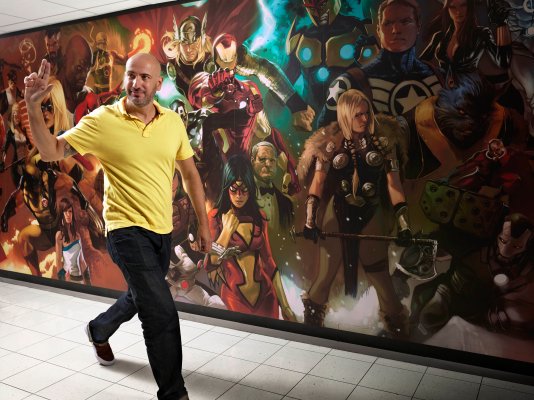 Behind Marvel’s Decision to Create These Controversial Female Superheroes
Next Up: Editor's Pick