Democratic presidential candidate Sen. Bernie Sanders (I-VT) speaks at an event held by striking U.S. Capitol workers on Capitol Hill September 22, 2015 in Washington, DC. The U.S. Capitol workers held a religious procession to urge a minimum wage of $15 and to welcome Pope Francis before the Pope meets with and addresses members of Congress on Thursday.
Win McNamee—Getty Images
By Sam Frizell

Preaching from the pulpit of a Lutheran church two blocks from the U.S. Capitol building, Vermont Sen. Bernie Sanders was in his element.

It was Tuesday morning on the day of Pope Francis’ arrival in Washington, D.C., and over a thousand low-wage government workers had crowded in and around the Lutheran Church of the Reformation on East Capitol Street to protest for a $15 minimum wage.

A homemade white altar dedicated was adorned with flowers and portraits of the pope. Someone jangled a tambourine while a small chorus sang “We Shall Overcome” and held stenciled signs with sayings like “Senators, Inequality is the Root of All Evil.”

Wearing a suit, Sanders cleared his throat and began agitating.

“Today, as we welcome Pope Francis to the United States and the U.S. Capitol, I hope that every member of Congress and the President will heed his call for social and economic justice,” Sanders said, his voice growing hoarse. “There is no justice in America when the largest low-wage employer is not McDonalds, not Burger King, not Walmart—it is the United States government!”

An on-and-off-again grassroots activist who first worked for a meatpacking union in his early 20s at the University of Chicago, Sanders could hardly miss the chance to strike with low-wage workers steps from his Senate office. Standing next to a red and blue portrait of Pope Francis with the letters “HOPE” in the style of the Obama 2008 campaign posters, Sanders called on the president to sign an executive order requiring federal contractors to pay all of their workers $15 an hour and allow them to unionize.

Read More: The Possible Presidential Candidate Who Agrees the Most With Pope Francis

For Sanders, the event was an exercise in movement building, part of the “political revolution” that he likes to say is as important as winning the presidential campaign. In his vision, the White House is important as a bully pulpit that can force Congress’ hand—a message he repeated in the church as he has in Iowa and New Hampshire, where he currently leads in the polls against Hillary Clinton.

“Brothers and sisters, thank you all for being here,” Sanders continued. “All of you know that throughout the history of this country nothing significant has haver been accomplished without struggle, without people standing up for dignity and saying Enough is Enough. We want justice, we want fair pay and we want a union!”

The white-haired Sanders is a well-known figure among some of the Capitol Hill workers in the audience on Tuesday, particularly those who work in the Dirksen Cafeteria, where he has his office. Sanders regularly makes the rounds with the cafeteria workers, talking inequality and unions and fair pay, and sometimes pausing for selfies in Dirksen’s halls. Most of them are more accustomed to serving senators coffee and cleaning up their hallways than protesting with them.

“He’s an awesome dude,” said Anthony Thomas, a cafeteria worker who recalled chatting with Sanders one-on-one outside during a work break. “This is the third time he’s taken his time out of his busy schedule to come support our strike.”

When Sanders took the pulpit, some in the mostly African-American audience cheered, “Bernie!” “Enough is enough!” the crowd said in unison with Sanders.

He has drawn hundreds of thousands of small-dollar individual donors who are clamoring to be part of his movement. Jaime Molina, a union organizer wearing a black Bernie t-shirt, said he donates $40 a month to Sanders’ campaign. “Bernie Sanders is the champion of working class people,” Molina said. “He’s standing up to the rich.”

“In my view, when we talk about morality and we talk about justice we must understand there is no justice when so few have so much and so many have so little,” Sanders intoned.

After his short speech, Sanders rushed back off to official business with barely a glance at the crowd. Shortly afterward, the congregation of workers followed to the U.S. Capitol building, chanting and holding signs.

“Brothers and sisters, we as people of faith, welcome Francis and his message of economic justice for the working poor,” the Presbyterian reverend, J. Herbert Nelson told the crowd. The Pope is someone Sanders can get behind, too: “The message to the Pope is: Keep doing what you’re doing,” he told TIME in an interview last week. 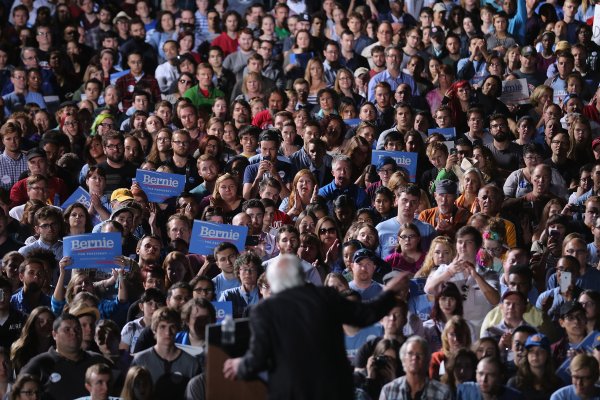