Ahmed Mohamed, a Texas Muslim teen who was arrested after taking his homemade clock to school, explains his clock at his house in Irving, Texas, on Sept. 17, 2015
Anadolu Agency—Getty Images
By Joanna Plucinska

Ahmed Mohamed, the freshman who gained national fame after being detained by police for bringing a homemade clock to school, has made an appearance at Google’s fifth annual Science Fair, to the delight of those in attendance.

Monday’s event, held at Google’s headquarters in Mountain View, Calif., aims to inspire students between the ages of 13 and 18 to be scientifically curious, and showcased 20 science-fair finalists’ projects from around the world, according to CNNMoney. This year’s theme was, “It’s your turn to change the world,” with a hefty $50,000 Google scholarship for the overall winner.

One of the biggest draws of the fair is meeting leading scientists, but this year’s star guest was much closer in age to the students attending, USA Today reports. The 14-year-old Ahmed made the rounds, introducing himself and taking selfies with the finalists and visiting students. “We learned about you in school!” one student from Oakland, Calif., happily told him, USA Today says.

Ahmed, a self-professed fan of robotics, was arrested after he brought a homemade clock to his school in Irving, Texas. His teachers suspected that the device might actually be a bomb. It turned out that it was, like many of the inventions on display at Google’s event, just an innovative (and innocent) science project.

The controversy rocketed the teenager to celebrity status. Within days, he received a deluge of invites from the likes of Facebook, Google and even President Barack Obama. Google’s invite to the Science Fair was the first that he’s accepted to date, USA Today says. 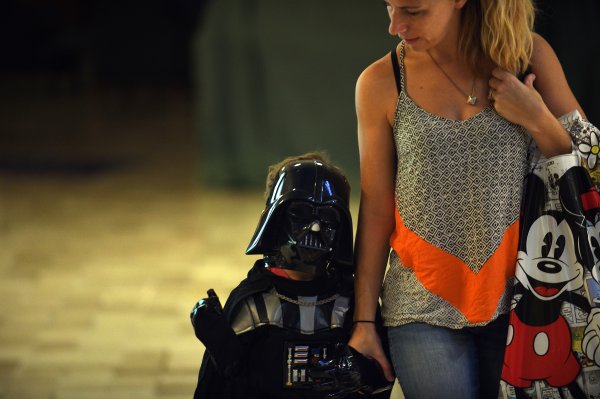 How Star Wars: The Force Awakens Will Make Billions for Disney
Next Up: Editor's Pick