4 Rituals That Will Make You Happy, According to Neuroscience

You get all kinds of happiness advice on the Internet from people who don’t know what they’re talking about. Don’t trust them.

Actually, don’t trust me either. Trust neuroscientists. They study that gray blob in your head all day and have learned a lot about what truly will make you happy.

UCLA neuroscience researcher Alex Korb has some insights that can create an upward spiral of happiness in your life. Here’s what you and I can learn from the people who really have answers:

1) The Most Important Question To Ask When You Feel Down

Sometimes it doesn’t feel like your brain wants you to be happy. You may feel guilty or shameful. Why?

Believe it or not, guilt and shame activate the brain’s reward center.

And you worry a lot too. Why? In the short term, worrying makes your brain feel a little better — at least you’re doing something about your problems.

But guilt, shame and worry are horrible long-term solutions. So what do neuroscientists say you should do? Ask yourself this question:

What am I grateful for?

Yeah, gratitude is awesome… but does it really affect your brain at the biological level? Yup.

You know what the antidepressant Wellbutrin does? Boosts the neurotransmitter dopamine. So does gratitude.

Know what Prozac does? Boosts the neurotransmitter serotonin. So does gratitude.

I know, sometimes life lands a really mean punch in the gut and it feels like there’s nothing to be grateful for. Guess what?

Doesn’t matter. You don’t have to find anything. It’s the searching that counts.

And gratitude doesn’t just make your brain happy — it can also create a positive feedback loop in your relationships. So express that gratitude to the people you care about.

(For more on how gratitude can make you happier and more successful, click here.)

But what happens when bad feelings completely overtake you? When you’re really in the dumps and don’t even know how to deal with it? There’s an easy answer…

You feel awful. Okay, give that awfulness a name. Sad? Anxious? Angry?

Suppressing emotions doesn’t work and can backfire on you.

But labeling, on the other hand, makes a big difference.

Ancient methods were way ahead of us on this one. Meditation has employed this for centuries. Labeling is a fundamental tool of mindfulness.

In fact, labeling affects the brain so powerfully it works with other people too. Labeling emotions is one of the primary tools used by FBI hostage negotiators.

(To learn more of the secrets of FBI hostage negotiators, click here.)

Okay, hopefully you’re not reading this and labeling your current emotional state as “Bored.” Maybe you’re not feeling awful but you probably have things going on in your life that are causing you some stress. Here’s a simple way to beat them…

Ever make a decision and then your brain finally feels at rest? That’s no random occurrence.

But deciding can be hard. I agree. So what kind of decisions should you make? Neuroscience has an answer…

Make a “good enough” decision. Don’t sweat making the absolute 100% best decision. We all know being a perfectionist can be stressful. And brain studies back this up.

Trying to be perfect overwhelms your brain with emotions and makes you feel out of control.

As Swarthmore professor Barry Schwartz said in my interview with him: “Good enough is almost always good enough.”

So when you make a decision, your brain feels you have control. And, as I’ve talked about before, a feeling of control reduces stress. But here’s what’s really fascinating: Deciding also boosts pleasure.

You give 2 rats injections of cocaine. Rat A had to pull a lever first. Rat B didn’t have to do anything. Any difference? Yup: rat A gets a bigger boost of dopamine.

So what’s the lesson here? Next time you buy cocaine… whoops, wrong lesson. Point is, when you make a decision on a goal and then achieve it, you feel better than when good stuff just happens by chance.

And this answers the eternal mystery of why dragging your butt to the gym can be so hard.

If you go because you feel you have to or you should, well, it’s not really a voluntary decision. Your brain doesn’t get the pleasure boost. It just feels stress. And that’s no way to build a good exercise habit.

(To learn what neuroscientists say is the best way to use caffeine, click here.)

Okay, you’re being grateful, labeling negative emotions and making more decisions. Great. But this is feeling kinda lonely for a happiness prescription. Let’s get some other people in here.

What’s something you can do with others that neuroscience says is a path to mucho happiness? And something that’s stupidly simple so you don’t get lazy and skip it? Brain docs have an answer for you…

No, not indiscriminately; that can get you in a lot of trouble.

But we need to feel love and acceptance from others. When we don’t it’s painful. And I don’t mean “awkward” or “disappointing.” I mean actually painful.

Neuroscientists did a study where people played a ball-tossing video game. The other players tossed the ball to you and you tossed it back to them. Actually, there were no other players; that was all done by the computer program.

But the subjects were told the characters were controlled by real people. So what happened when the “other players” stopped playing nice and didn’t share the ball?

Subjects’ brains responded the same way as if they experienced physical pain. Rejection doesn’t just hurt like a broken heart; your brain feels it like a broken leg.

Relationships are very important to your brain’s feeling of happiness. Want to take that to the next level? Touch people.

Touching is incredibly powerful. We just don’t give it enough credit. It makes you more persuasive, increases team performance, improves your flirting… heck, it even boosts math skills.

Touching someone you love actually reduces pain. In fact, when studies were done on married couples, the stronger the marriage, the more powerful the effect.

So hug someone today. And do not accept little, quick hugs. No, no, no. Tell them your neuroscientist recommended long hugs.

Don’t have anyone to hug right now? No? (I’m sorry to hear that. I would give you a hug right now if I could.) But there’s an answer: neuroscience says you should go get a massage.

So spend time with other people and give some hugs. Sorry, texting is not enough.

When you put people in a stressful situation and then let them visit loved ones or talk to them on the phone, they felt better. What about when they just texted? Their bodies responded the same as if they had no support at all.

Author’s note: I totally approve of texting if you make a hug appointment.

(To learn what neuroscience says is the best way to get smarter and happier, click here.)

Okay, I don’t want to strain your brain with too much info. Let’s round it up and learn the quickest and easiest way to start that upward spiral of neuroscience-inspired happiness…

Here’s what brain research says will make you happy:

So what’s the dead simple way to start that upward spiral of happiness?

Just send someone a thank you email. If you feel awkward about it, you can send them this post to tell them why.

This really can start an upward spiral of happiness in your life. UCLA neuroscience researcher Alex Korb explains:

So thank you for reading this.

And send that thank you email now to make you and someone you care about very happy.

Join over 205,000 readers. Get a free weekly update via email here. 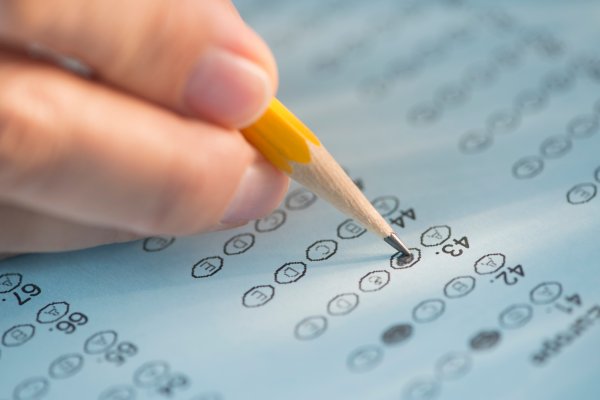 Your First Instincts on Multiple Choice Questions Might Not Be Your Best
Next Up: Editor's Pick