A super PAC supporting Ohio Gov. John Kasich’s campaign is out with a new ad seeking to contrast his record with Donald Trump’s bluster.

The new ad for the GOP presidential candidate features footage of the same model helicopter, a Sikorsky S-76, that Trump flies, with a movie-trailer voice-over describing Kasich’s record. “He’s turned red ink to black,” the voice says as the helicopter lifts off. “Shattered expectations. Experience. Success. Speaks to every one of us. Blunt. Direct. Not part of the tired system.”

Once the aircraft turns, Kasich’s name is emblazoned on its side, in even larger type than on Trump’s helicopter. The ad continues to list Kasich’s accomplishments, before the governor briefly appears direct-to-camera to say, “it can happen again.”

The new spot, first reported by Bloomberg, was produced by veteran GOP ad man Fred Davis, a veteran of the Jon Huntsman and John McCain presidential campaigns who has made some of the party’s edgiest ads over the past two decades.

In 2010, while working for Carly Fiorina’s senate campaign in California, Davis produced the infamous “demon sheep” spot, which the candidate later credited with providing the needed earned media to surge in the polls in her primary. In 2011, he made a motocross video tied to Jon Huntsman’s campaign launch.

The pro-Kasich group New Day for America has already spent $5 million on ads in New Hampshire, which have sent Kasich to the top-tier in the Granite State. 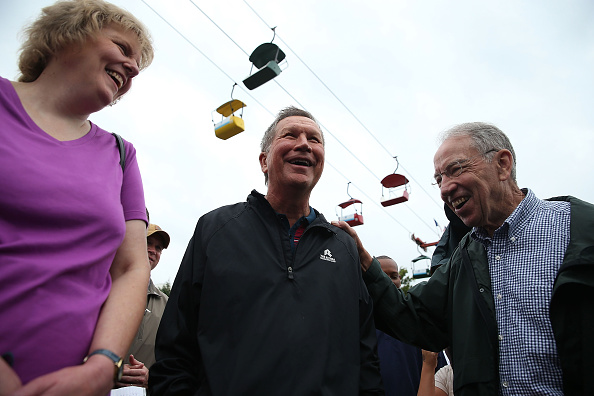 John Kasich Has a Pep Talk for America
Next Up: Editor's Pick