The First Time a Pope Visited the U.S. Was Much More Complicated

As the the world will see clearly this week, the United States knows how to make a big deal out of a papal visit. When Pope Francis arrives in Washington, D.C. Tuesday, it will begin days of fanfare everywhere from the White House to the United Nations.

Things were far more complicated when the first-ever papal visit to the U.S. took place almost exactly 50 years ago.

In 1965, Pope Paul VI planned a trip to New York in order to address the then-relatively-new United Nations and urge peace, especially as conflict between India and Pakistan was heating up.

The challenge for U.S. officials was that the nation didn’t have formal diplomatic relations with the Vatican. Many Americans believed that to do so would violate the separation of church and state and could give the Holy See undue influence. (Washington changed its mind in the early ’80s.) That lack for recognition meant that President Lyndon Johnson couldn’t treat Pope Paul VI like a visiting head of state. But nor could he ignore him. Snubbing the pope on his first ever visit to the U.S. would have been taken as an insult by Catholics the world over.

The solution? A clever bit of timing–or political ruse, depending on one’s perspective.

The White House said Johnson was already planning in New York for meetings. Given that, it would stand to reason that the two would find some to talk. Sure enough, the pope and the president met at the Waldorf-Astoria hotel to discuss how to make the world a more peaceful place. Other highlights of the papal visit included paying calls at St. Patrick’s Cathedral (where Pope Francis will attend Vespers on Thursday) and leading a Mass at Yankee Stadium (Pope Francis’ equivalent will be at Madison Square Garden).

And those aren’t the only ties between Pope Francis’ modern visit and Pope Paul’s inaugural trip: the dates for Paul VI’s visit to the United States were chosen, as TIME reported back then, to coincide with the feast of Saint Francis of Assisi, on the idea that he was the namesake of San Francisco, which was where the United Nations was born. Of course, Saint Francis also inspired a certain someone who’ll be speaking at the U.N. in New York on Friday. 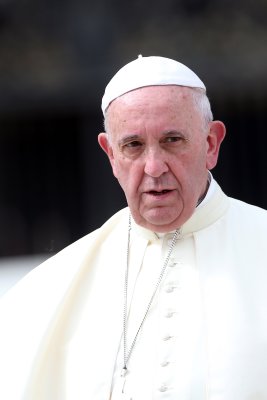 Why I Am Boycotting Pope Francis’s Address to Congress
Next Up: Editor's Pick