It was a “victory of the people” said Greek Prime Minister Alexis Tsipras as he was swept back to power following a snap general election on Sunday.

Despite his failure to rid Greece of the troika as he’d once promised, and instead, dragging the country into a yet another austerity program, Tsipras told a band of over 2,000 Syriza loyalists near Syntagma Square on Sunday night that “justice had been done.”

In comparison to January’s lightning victory for Syriza, and the defiance and righteousness that emerged during the bailout referendum held in July, celebrations were relatively low-key. And no surprise — the government has a mountain of harsh policies to implement, including full reassessment of the welfare system with savings worth 0.5% of GDP, reconstruction of a broken tax-collection system and full liberalization of the energy market.

Tsipras told the audience that starting on Monday morning he will “fight corruption” — a key strategy plank during the election campaign. Tsipras lost some of his strongest comrades in the run-up to the election, including the former president of the parliament, Zoe Konstantopoulou, who joined several other splitters from Syriza in a new party called Popular Unity. They were angry about what they saw as Tsipras’ capitulation to Germany and other creditor nations. But the Prime Minister’s legions of fans remain undeniably behind him.

“Tsipras is strong in his game; he’s playing chess and we’re following him,” said 32-year-old Ugur from Athens. “He is a realist and a leftist. He had to sign the memorandum because we were on the edge and were going to fall over.”

“I’m very happy with the result — Syriza is the only party that will support the poor people and workers’ rights; he’s one of the best politicians to renegotiate the memorandum,” said 50-year-old Kostas Dianis.

Although a former communist, some critics say Tsipras can no longer claim to represent the far left — not after his capitulation in Brussels earlier this summer when he agreed to a third bailout worth over $95 billion based on the demands of European creditors.

“Tsipras is an agent for capitalism. He is not from the left, he is part of the system and will continue the system rather than changing it,” said 32-year-old Yannis, a taxi driver who voted for Syriza in January but this time voted for the Communist party because “they’re the only ones that say what they mean.”

And although Tsipras was unable to free Greece from austerity, as he had initially promised, the alternative left — the MPs that split from Tsipras earlier this summer, provided few viable alternatives to Greek voters.

Though she remains personally popular, the strident Zoe Konstantopoulou didn’t win back her seat after Popular Unity failed to reach the 3% threshold. “The mandate of the people on the 5th of July was a clear ‘No’ to the extortion, the violation of human rights and ‘No’ to austerity,” she told TIME in an interview.

Many Greek voters may well have agreed with Konstantopoulou, but they were still willing to give Tsipras a chance. “I voted for Tsipras because the others are worse and they got us into this mess,” said 43-year-old Elaney Depoli. “People in Greece are depressed from five years of austerity. This is the best opportunity to get better results. He signed the memorandum to save Greece, and he is saving Greece.” 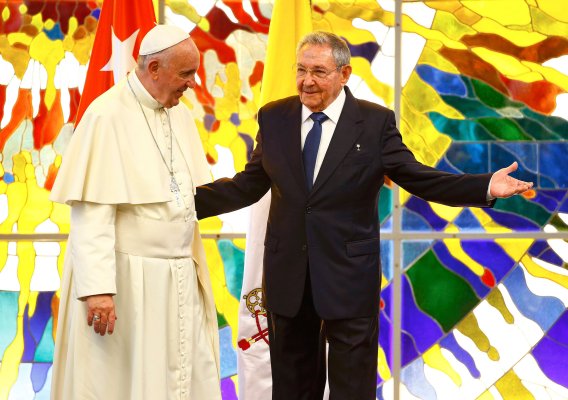 Pope Francis Sits Down with Raúl Castro in Havana
Next Up: Editor's Pick