A busy weekend at the box office saw a slew of new openings and some solid debuts, as Maze Runner: The Scorch Trials easily won the weekend with an estimated $30.3 million.

Although most expected Scorch Trials to earn about $35 million, it actually fell short of the original Maze Runner’s $32.5 million debut. Still, it’s a strong opening for the adaptation of James Dashner’s young adult novel, which earned a B+ CinemaScore and stars Dylan O’Brien as a teenager struggling to survive in a scorched wasteland.

Fifth place went to Everest, which opened exclusively on 3-D, IMAX, and premium screens and earned a whopping $7.6 million in only 545 locations. Based on the true story of a 1996 disaster, Everest stars Josh Brolin, Jason Clarke, and Jake Gyllenhaal and will go wide next weekend. Everest also opened in 36 international territories, bringing its worldwide total to an estimated $35.8 million.

This weekend’s other new wide release, the faith-based drama Captive, opened to an estimated $1.4 million in 800 theaters. Based on a true story, Captive stars Kate Mara as a woman taken hostage by an escaped convict (David Oyelowo).

At the specialty box office, Pawn Sacrifice, starring Tobey Maguire as chess legend Bobby Fischer, earned an estimated $206,879 in 33 theaters, while Sicario, starring Emily Blunt as an FBI agent taking on the drug war, earned $390,000 in just six theaters. For Sicario, that’s an average of $65,000 per theater — the best so far this year.Sicario will go wide on Oct. 2. 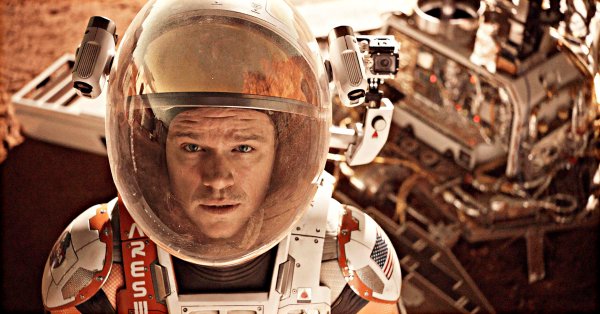 Astronauts Watch 'The Martian' While In Space
Next Up: Editor's Pick