The previous visits of Pope John Paul II and Pope Benedict had not interested Salvador, a 47-year-old engineer from Viñales, about an hour and a half away. But his devout mother, who is 79, said she would not miss this pope even if it meant she had to walk to Havana, so Salvador agreed to accompany her.

At first, he was concerned about how the heat and the humidity would affect his mother. Fortunately, a friend was able to get her a chair to sit in during the mass. Afterward he said it had been worth it.

“I have never seen her so happy and smiling,” Salvador said. “She did not complain once and believe me—this is a first!”

Salvador’s mother was not the only one for whom attending the mass was tantamount to a pilgrimage.

Ivysita, 15, said there are not many Catholics at her school and religion is rarely discussed, so the mass was a rare event. She came with a group from her church in Western Havana, all of whom were jumping and shouting for the pope’s attention.

“Me and my friends we are happy, we could not see him very well but we shouted so he would notice us,” she said. “I am sure he did look at us and he heard us. We were screaming at the top of our lungs.”

Sister Maria Rosa, who is in her mid 30s, came with a group of nuns from the nearby area of El Rincon, on the outskirts of Havana. She thought that Pope Francis’ visit would help revitalize the Catholic church in a country with a nominally atheist government system.

“The Pope is a wonderful man, so sensitive,” she said. “He is humble he is not showy, and he will invigorate our church. I am sure he has more surprises for the world to come.”

For others, however, the pope’s visit was more important for secular reasons, such as the signs of improved economic relations with the United States.

Igor, 37, who lives in Mariel, came to the mass at the insistence of his wife. He was underwhelmed since they were not able to get very close to the pope, though he found Francis “respectful” toward the country and its president, Raúl Castro.

But he was far more interested in what the visit showed about Cuba’s place in the world.

“Cuba is very much in the news,” he said. “The Pope’s visit helps us. If the (U.S. trade) embargo was lifted we could be so much more.” 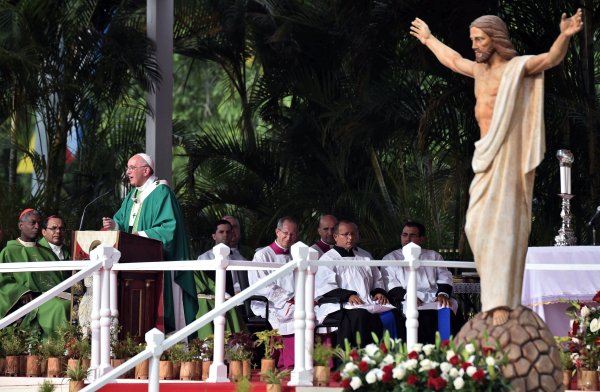 Transcript: Read the Full Text of the Pope's Mass in Cuba
Next Up: Editor's Pick