Cubans Ready to Meet a Different Kind of Pope

People watch as Pope Francis is shown on television as he arrives in Havana, Cuba on Sept. 19, 2015 in Santiago de Cuba, Cuba.
Joe Raedle—Getty Images
By Dolly Mascareñas

Cubans have seen popes before, but not one like Pope Francis. In conversations before the pope’s arrival Saturday, many Cubans said they are excited because he is Argentinian, speaks Spanish and has had a life they find relatable.

Alejandro, 53, a government economist who fixes cars and motorcycles as a side business, says he was “never big on religion,” but he was very curious to see how Francis’ visit would go.

“I think this Pope is very, very different, he has done many things,” said Alejandro, who like other Cubans interviewed, preferred not to have his last name published. “Now everyone has to listen to what he says to the Cubans. Though he will be speaking for the Cubans in the street, but, mostly, I think to our leaders. Let’s see if they listen.”

For many, Pope Francis’ visit has caused them to reminisce about the 1998 visit of Pope John Paul II and the 2012 visit of Pope Benedict.

Marlys, 22, who is studying to become a doctor, recalled the air of excitement around John Paul II’s trip. “I remember my family taking us to where he was going to pass through so we could see him and the (popemobile),” she said. “Everybody was shouting and screaming.”

Although she is not Catholic and considers herself skeptical of religion, Marlys said she was still eager to see Pope Francis and hear what he has to say.

Like his predecessors, the pope intends for his visit to help spur interest in the church in this nominally atheist country. Even President Raul Castro, who studied under the Jesuits along with his brother, has said that he may consider praying again after meeting the pope.

Sitting on her porch near the Holy See’s Residence, Caridad never thought she would see a pope come to Cuba, much less the two that have already passed by her porch. Now in her mid 70s, the devout Catholic still recalls how her Catholic school was closed after the revolution in the 1950s. She too hopes for a resurgence.

“My old school closed, the nuns left,” she said. “Our family kept on praying and visiting the few open churches.”

But Caridad was also concerned about what she felt was a different direction that Francis is taking the church.

“This Pope is not like John Paul, he seems very modern and even revolutionary,” she said. “I am a little scared about the future of the Church with someone so liberal.” 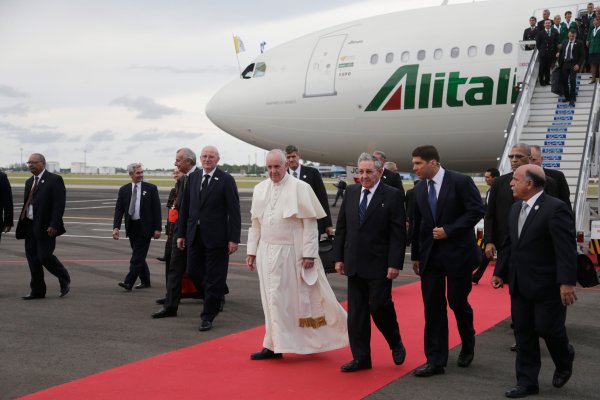 See Photos From Pope Francis' Historic Visit to Cuba
Next Up: Editor's Pick