Pope Francis got an early treat on his flight to Cuba Saturday morning. María Antonieta Collins, senior special correspondent for Univision, surprised the pope with a box of Argentinian empanadas, a stuffed pastry made for him by immigrants in Miami. Francis looked thrilled and blessed her. He soon after shared the empanadas with all the journalists aboard the flight.

“It wasn’t easy to make the empanada surprise happen,” Collins tells TIME. “What can I give Pope Francis? Argentinian empanadas.”

Collins found a restaurant in Miami where immigrants made the treat for the pope.

It was quite the project to get the empanadas from Miami to Rome onto the papal plane and then into the pope’s hands. The empanadas at one point spent time in a freezer at the Vatican press office, Collins says.

She ended up trying to defrost them with hair dryers. She packed them in her carry-on, at times holding them in her arms, “like a baby,” she laughs.

“It was clearly worth it. Empanadas for el papa,” she said, her eyes filling with tears. “The holy father was so happy and I know he told his assistant, please warm these in the oven!”

He did just that and shared them with everyone on the plane. As this reporter can attest, they were delicious.

Alitalia flight attendant serves the empanadas that were a gift to Pope Francis to journalists aboard the papal flight from Rome to Havana.
Elizabeth Dias, Sept 19, 2015 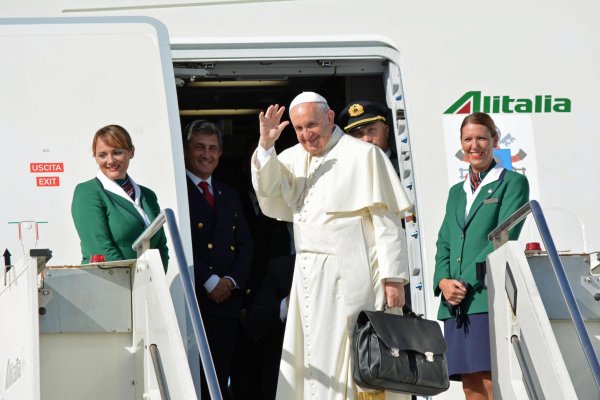