Refugees Squeeze Through Crack in Croatia's Border as Path to E.U. Blocked

Migrants walk towards the eastern-Croatia town of Tovarnik, close to the border between Croatia and Serbia, on Sept. 18, 2015.
AFP/Getty Images
By Rebecca Collard / Sid-Tovarnik

A dusty dirt road that cuts through the cornfields where northwest Serbia meets Croatia has become the main entry into the European Union for refugees, with crossings in Hungary and elsewhere in Croatia sealed as the mass migration in the E.U. continues.

About 280 refugees crossed per hour on Friday from the Serbian town of Sid to Tovarnik in Croatia, most having come from Macedonia overnight. They were pointed directly to buses and taxis to the border area. “Is the border open?” a group of Afghans asked, before starting the mile-and-a-half trek to the frontier.

The answer may not stay the same for long. Croatia said late Thursday it would close its border with Serbia but instead seemed to only close its official crossings, allowing thousands of people to enter through these fields on Friday. Some 17,000 people had crossed into Croatia since it announced Wednesday it would open its borders, but after a U-turn the country’s future as a route into the E.U. is anything but certain.

“We have a heart but we also have a brain,” said Croatian Prime Minister Zoran Milanović at a press conference aired on the state-run HRT radio. He said the government could provide water, food and medical care, but could not register all the people.

It’s increasingly unclear who else might. Hungary, which lies to Croatia’s east, sealed its border with Serbia on Sept. 14 using a 13-ft. fence lined with razor wire and declared a state of emergency in the border counties. On Thursday, Hungarian police fired tear gas and water cannons into a crowd on the Serbian side of the border, as people threw rocks and chanted “open, open, open,” demanding in vain to be let in.

Word has spread quickly on the road. “Hungary is no good,” said a man from Iraq heading down the dirt road toward the border, when asked why he chose to come to this border with Croatia. “All the people are taking this way,” added Hala Kandalaft from Suwayda, Syria who is traveling with her three children. “My husband stayed in Syria. He’s afraid of the sea.”

The Kandalaft family landed in Greece a week ago and heard the border with Hungary would soon close and that there was a new route through Croatia. Like almost everyone taking this path, Kandalaft says she is going to head through Slovenia and Austria to Germany, which has become a magnet for refugees after pledging in August to take in all Syrian asylum seekers.

But many migrants entering Croatia don’t make it to Slovenia, which is part of the Schengen border-free zone that covers most of Western Europe. Instead, thousands are being taken to the eastern Croatian town of Beli Manastir to cross the border to Hungary. On Friday alone, some 3,000 refugees crossed into Hungary from Croatia, according a statement from the Croatian foreign ministry.

Hungary’s foreign minister Peter Szijjarto has accused Croatia of pushing migrants to illegally enter Hungary by allowing them to be dropped off by the Hungarian border. “Rather than respecting the laws in place in the E.U., they are encouraging the masses to break the law, because illegally crossing a border is breaking the law,” said Szijjarto after talks with his Serbian counterpart in Belgrade.

Croatia says it is already overwhelmed with refugees and is calling on both Hungary and Slovenia to open their borders. As refugees continue to pour into the Balkans from Greece, states inside the European Union and on its fringes are becoming ever more bitterly divided on how to deal with the crisis.

“We have seen openings and closures of borders all along during this emergency,” said Melita Šunjić a spokesperson for the UN High Commissioner for Refugees (UNHCR), standing at the drop point near the Sid-Tovarnik border crossing between Serbia and Croatia. “And this is why as the UNHCR we are calling for a European solution. No single country can solve the problem.” 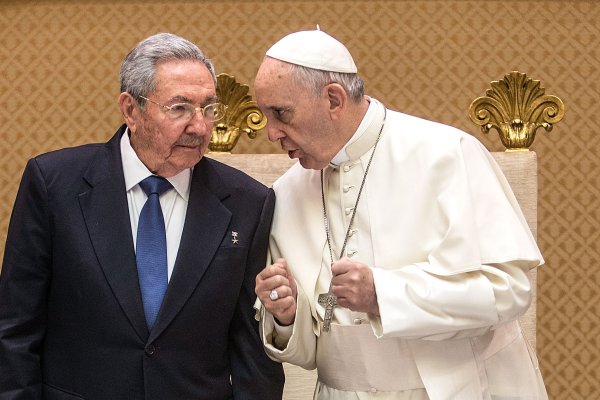 President Obama Talked to Raul Castro About Pope's Visit
Next Up: Editor's Pick