Why I Am Boycotting Pope Francis’s Address to Congress

It is difficult to convey the excitement I first felt when it was revealed that His Holiness Pope Francis was invited to Washington D.C. to address the world from the floor of the House of Representatives. Many believed, like I did, that this was an opportunity for the Pope to be one of the world’s great religious advocates and address the current intolerance of religious freedom. An opportunity to urgently challenge governments to properly address the persecution and execution of Christians and religious minorities; to address the heinous and senseless murders committed by ISIS and other terrorist organizations. An opportunity to address the enslavement, belittlement, rape and desecration of Christian women and children; to address the condoned, subsidized, intentionally planned genocide of unborn children by Planned Parenthood and society; and finally, an opportunity for His Holiness to refocus our priorities on right from wrong.

Media reports indicate His Holiness instead intends to focus the brunt of his speech on climate change—a climate that has been changing since first created in Genesis. More troubling is the fact that this climate change talk has adopted all of the socialist talking points, wrapped false science and ideology into “climate justice” and is being presented to guilt people into leftist policies. If the Pope stuck to standard Christian theology, I would be the first in line. If the Pope spoke out with moral authority against violent Islam, I would be there cheering him on. If the Pope urged the Western nations to rescue persecuted Christians in the Middle East, I would back him wholeheartedly. But when the Pope chooses to act and talk like a leftist politician, then he can expect to be treated like one. Artist and columnist Maureen Mullarkey effectively communicated this fallacy stating, “When papal preferences, masked in a Christian idiom, align themselves with ideological agendas (e.g. radical environmentalism) [they] impinge on democratic freedoms and the sanctity of the individual.”

The Earth’s climate has been changing since God created it, with or without man. On that, we should all agree. In Pope Francis’ encyclical on the environment (written with the consultation of that great seminary the EPA and its embattled head Gina McCarthy), he condemned anyone skeptical of the link between human activity and climate change and adopted the false science being propagated by the Left. If the Pope wants to devote his life to fighting climate change then he can do so in his personal time. But to promote questionable science as Catholic dogma is ridiculous.

Furthermore, I am a proud Catholic. I chose to attend a Jesuit college in the Midwest, not just for my undergraduate but also my graduate studies (D.D.S.). I received an excellent education where I was taught to think critically, to welcome debate and discussion and to be held accountable for my actions; a trademark of a Jesuit education. And finally, I am a Conservative, a member of Congress, a constitutionalist and adamant defender of our Republic; an American that believes in strict adherence to the rule of law and a firm believer in our First Amendment protections, in this particular discussion, the freedom of religion.

So at this pivotal moment in world history, His Holiness, Pope Francis, is intending to spend the majority of his time on one of the world’s greatest stages focusing on climate change. I have both a moral obligation and leadership responsibility to call out leaders, regardless of their titles, who ignore Christian persecution and fail to embrace opportunities to advocate for religious freedom and the sanctity of human life. If the Pope plans to spend the majority of his time advocating for flawed climate change policies, then I will not attend. It is my hope that Pope Francis realizes his time is better spent focusing on matters like religious tolerance and the sanctity of all life. As the leader of the Catholic Church, and as a powerful voice for peace throughout the world, His Holiness has a real opportunity to change the climate of slaughter in the Middle East… not the fool’s errand of climate change.

Paul Gosar is a member of the United States House of Representatives from Arizona. This article originally appeared on Townhall.com 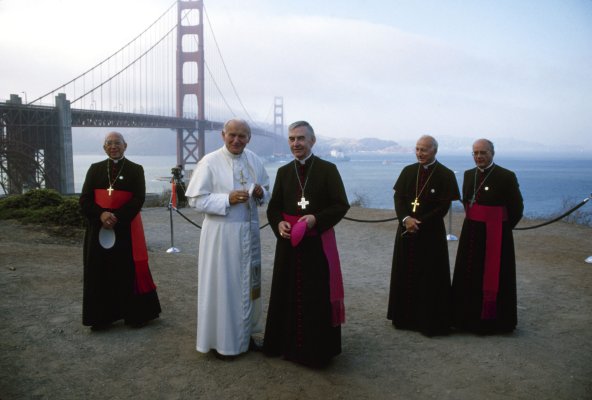 See Photos of Every Papal Visit to the U.S. in History
Next Up: Editor's Pick