In Its 8th World Cup, Rugby Hopes to Take Over the World

From left: Kieran Read, Richie McCaw and Ma'a Nonu of the All Blacks perform the haka during The Rugby Championship, Bledisloe Cup match between the New Zealand All Blacks and the Australian Wallabies at Eden Park on Aug. 15, 2015 in Auckland.
Phil Walter—Getty Images
Ideas
By Alex Massie
Alex Massie is Scotland editor of the Spectator magazine

Rugby, an old English joke tells us, is a hooligan’s game played by gentlemen whereas soccer is a gentleman’s game played by hooligans. Like many such waspish observations, there’s sufficient truth in the quip for it to sting. Rugby, after all, takes its very name from one of the great English boarding schools at which it was developed and, later in the nineteenth century, codified. If the sport has spread across the world since then, it retains, at least in its birthplace, an air of upper-class privilege.

Such initial appearances can be misleading, however. As the rugby world gathers in England this month for the eighth edition of the sport’s quadrennial World Cup, the game has arguably never been in ruder health. As many as seven of the 20 competing nations have less than fanciful hopes of ultimate triumph and the tournament is likely to set new records in terms of both attendance and revenue.

Next year, the abbreviated seven-a-side version of rugby, will make its debut at the Olympics, adding weight to the suspicion that, at long last, rugby is poised to break-out from its long-established heartlands and become a truly global game.

And why wouldn’t it? Rugby, at its best, offers a thrilling spectacle combining ferocious intensity with high-class athleticism. French rugby, it was once said, was divided between those rugby men who were piano players and those who were piano shifters but in truth all rugby teams demand a balance be struck between the artistic and the muscular; it is the combination of high-skilled artistry and high-powered physical confrontation that gives the game its peculiar edge and its special advantage.

That, in fact, is why Victorian schoolmasters thought it a laboratory for growing character. Rugby — a sport in which the individual must sacrifice himself to the collective effort — was a crucible within which a muscular form of Christian virtue could be developed. Stout-hearted, upstanding, young men would then appreciate the values and priorities that would be needed to build, and then keep, the British Empire.

Or so went the theory. Like cricket, the British took rugby with them across the world. New Zealand, Australia and South Africa became strongholds of the game; frontier lands on the far edge of the world found in rugby a sport that perfectly expressed the kind of rugged, hard-working, societies they imagined themselves to be.

But rugby spread elsewhere too. First to France then, latterly, to countries such as Argentina, Italy and Romania. If the contenders for glory at this tournament are still the traditional southern hemisphere powers, plus England, Wales, Ireland and France, this is also a worldwide festival of rugby. From the south seas of the Pacific — Tonga, Fiji and Samoa — to Japan and Uruguay and Georgia, rugby has never been more international.

And the North Americans will be present too. The U.S.A. Eagles and Canada have never quite fulfilled their promise but the rugby world appreciates only too well that if rugby could ever capture the hearts and minds of even a few million Americans, the U.S.A. might easily become a powerful player at the upper echelons of the sport’s hierarchy. Certainly, the game has never been more popular in the U.S. Last year the New Zealand All Blacks — so named for the imposing black uniforms which, on their own, frequently appear to induce a sense of dread amongst their opponents — played the US at Chicago’s Soldier Field. The game was a sell-out and, though the Eagles were badly beaten, it offered a hint of rugby’s rich prospects in the U.S.

Moreover, with American parents increasingly concerned by the potential for long-term damage caused by playing too much American football, there is, at least in theory, an opportunity for rugby to spread its wings in north America. Even a modest uptick in interest could pay a remarkable dividend.

The game, after all, is well-suited to the U.S. Like American football it is simultaneously simple and complicated. The goal — advancing the ball over your opponents “try line” — is understood in a second; the complexities of the sport’s rules and the skill required to master its many different positions make mastering rugby a different matter.

But, at least at a high school or amateur level, rugby remains a game for everyone of almost any different size or shape. Somewhere there will be a place on the rugby field for you. Rugby, at any level, is an incubator for collective endeavour. The pleasure of a stand-out individual performance is considerable but the true satisfaction comes from the communal expense of effort. Forwards win possession for backs and backs win ground for forwards and the pair enjoy a symbiotic, mutually reinforcing relationship. Each are essential just as every player is called to do his shift in defence. Every rugby player must hurl his body into the fray on behalf of his team-mates. This suffering, when it works its greatest magic, creates a bond of mutual obligation. The members of a rugby team may grow old but their memories, increasingly sepia-tinted, endure forever. No man is left behind.

Perhaps that sounds sentimental or overly romantic. But it is the currency of rugby nonetheless. Not for nothing do rugby people talk of “the rugby family,” acknowledging that it stretches to all corners of the globe. There are few other sports in which Tonga could meet France on remotely equal terms yet, four years ago at the last World Cup, Tonga defeated the French in one of the sport’s most glorious and memorable upsets.

In other places — South Wales, the Scottish Borders, southwest France, for instance — rugby is the means by which any number of small towns define their place in the world. Here, as in the farmlands of South Africa or the sheep stations of New Zealand, rugby is both working-class and classless. The playing fields of the English private schools are many miles, both figuratively and literally, from these places but the values of community, work, and mutual support still apply.

Rugby, above all, is a game for hard men with big hearts. A game of courage and artistry in equal measure. No wonder that, at its best, it is soaked in a kind of sweat-stained poetry. The intensity can be brutal but it is coupled with a kind of artistry that can reach awe-inspiring heights. A game, in short, for warrior poets. A game that reveals character as surely as it builds it. A game for all.

Read More: 5 Reasons Why You Should Pause American Football and Watch the Rugby World Cup 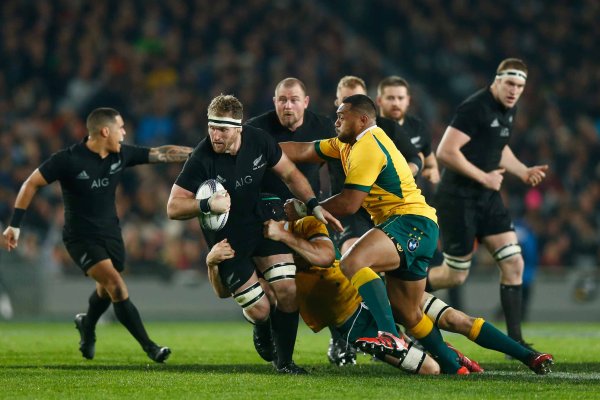 Multicultural New Zealand Has Melded Spirit And Skill To Create The Perfect Rugby Squad
Next Up: Editor's Pick