People from the Nigerian town of Malam Fatori, close to the borders with Niger and Chad, pass by a car with Chadian gendarmes (in uniform) as they flee Islamist Boko Haram attacks to take shelter in the Niger's town of Bosso on May 25, 2015
Issouf Sanogo—Getty Images
By Mark Rivett-Carnac

Half a million children have fled attacks from the Islamic militant group Boko Haram over the past five months, UNICEF said in a report released Friday.

The recent surge brings the total number of displaced children in northern Nigeria to 1.2 million — more than half of them are under the age of 5. A further 265,000 children have fled their homes in Cameroon, Chad and Niger.

Boko Haram has orchestrated a campaign of bombings, assassinations and abductions in Nigeria over the past few years. The group gained worldwide notoriety in April 2014 when it kidnapped more than 270 schoolgirls from the town of Chibok in northern Nigeria’s Borno state.

“It’s truly alarming to see that children and women continue to be killed, abducted and used to carry bombs,” said Manuel Fontaine, the UNICEF regional director for West and Central Africa, in the report.

Since the beginning of the year, children and woman are increasingly used in bombings, said Anne Boher, the UNICEF Niger chief of communications, in an email to TIME.

“Women and girls are involved in approximately three-quarters of the attacks,” she said. And children are “used, often without knowing, to carry bombs that were strapped to their bodies and detonated remotely in public places.”

Funding shortfalls have hampered work on the ground, says UNICEF. The organization says it has only received 32% of the $50.3 million it requires this year. And in a sign of worsening conditions, victims of the insurgency also face growing food insecurity and a cholera outbreak in displacement camps in Borno state. 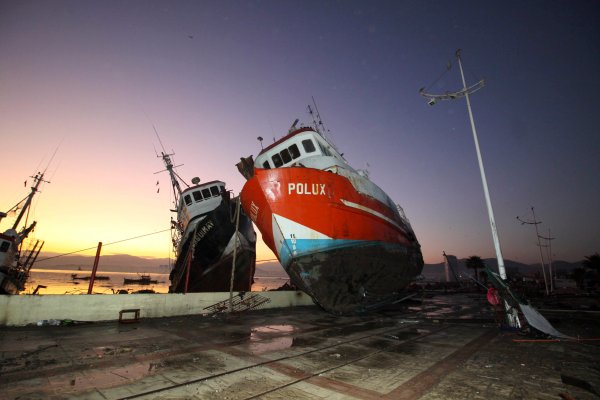 Recovery Efforts Begin in Chile After Huge Earthquake
Next Up: Editor's Pick