Senator Claire McCaskill (D., Mo.) said that she wants more women to see themselves as political candidates, but that doesn’t mean supporting all of them.

“I could never support Carly Fiorina under any circumstances,” McCaskill told TIME managing editor Nancy Gibbs at the panel co-hosted by TIME and Real Simple on Thursday night. “I am proud of her for being a strong, smart woman, I am proud that she’s running, but I could never support her. I’m afraid of what America would be if she were President.”

She also included a not-so-subtle dig at another GOP hopeful, Donald Trump. “Running for President is more complicated than, ‘I’m smart. You’re stupid. You’re ugly. Build a wall,’” she said. “Anybody who thinks they can roll into the Oval Office and issue edicts like a CEO of a business doesn’t understand our system and the elegance of our Constitution.”

McCaskill emphasized her support of Democratic presidential candidate Hillary Clinton. McCaskill writes in her new memoir Plenty Ladylike that she’s had some bumps with the Clintons in the past (both when she said on the radio that she “wouldn’t want her daughter near” Bill Clinton, and when she endorsed Barack Obama over Hillary in 2008) but now throws her undivided support behind the former Secretary of State. “I can’t imagine anyone who has run for President in my lifetime that has stronger qualifications to be President than Hillary Rodham Clinton,” she said. “The majority of this country is going to want substance and stability over anger.”

As for Clinton’s slipping poll numbers and the notion of Vice President Joe Biden entering the race, McCaskill said, “Imagine for a minute that Hillary Clinton said she wasn’t going to run, and Joe Biden said he was going to run: Joe Biden would be attacked for his recommendation not to go after Osama bin Laden, for all his gaffes, and the media would be piling on him.”

“The media would be saying, ‘You know Hillary Clinton should be getting into the race.'”

Gibbs also asked if McCaskill would ever consider running for the top job herself. McCaskill didn’t make any promises, but said she didn’t think it was likely. “I don’t think it’s a practical reality that I could become President,” she said. “I’ve certainly thought about it.” But, she said, “I’ve also had the blessing and the curse of being close to a presidential campaign,” and it’s not something she’d sign up for.

For now, the Senator is happy as such. “I set my sights on governor, I didn’t make governor,” she said. “But I’m in the U.S. Senate and that’s not bad.”

Check out this week’s issue of TIME to read more about the poll and for more insights from successful women on how their own ambitions have changed over time in our feature story by Kristin van Ogtrop, the editor of Real Simple. 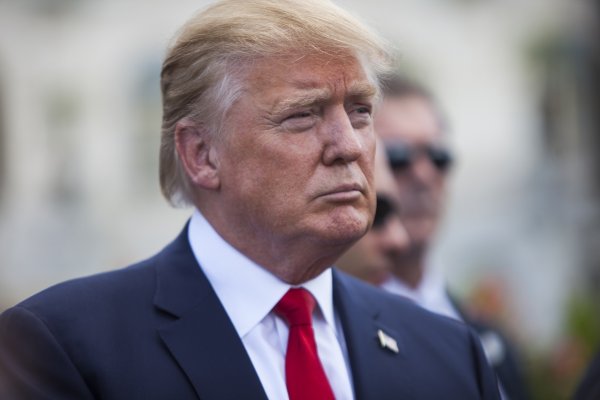 Donald Trump's Lead Holds in Iowa
Next Up: Editor's Pick