Only a Woman Could Slow Donald Trump

If there’s one thing on which everyone seems in agreement after the second Republican presidential debate, it’s that Carly Fiorina, the former tech industry CEO who had to fight just to get onto the main stage, was the breakaway winner of the evening. Confident, strong and precise, she had a commanding and graceful presence. Perhaps most impressively, she accomplished the feat of standing up to Donald Trump, succeeding where his other rivals mostly failed.

A viral tweet compared Fiorina’s drubbing of Trump to the iconic scene in the final Lord of the Rings movie, The Return of the King, in which the monster boasts, “No man can kill me”—only to have the warrior princess take off her helmet and shout, “I am no man!” before striking him down. And indeed, in some ways, Fiorina’s womanhood gave her an advantage in a confrontation with Trump.

Feminists have often remarked on the double bind faced by women seeking leadership roles: if too aggressive, they are seen as shrill, unfeminine and off-putting; if not aggressive enough, they are seen as too weak to lead. While this sexist bias exists, it is often modified by circumstances: For instance, while a 2007 study found that hypothetical female executive candidates who show anger are penalized while male candidates tend to be rewarded, the female penalty disappeared if the woman had a good reason to be angry. And there is far less recognition of the fact that for women who can find the right balance, their gender can be an advantage: They can be tough without being too intimidating, and they can make it very hard for their male opponents to counterattack without being seen as bullies.

Fiorina’s female edge was clearly on display in her talked-about face-off with Trump, addressing his disparaging remarks about her looks in a recent Rolling Stone interview. Her steely response—“Women knew what Donald Trump meant”—was met with applause; when he tried to dig himself out of the hole by calling her beautiful, it came across as both fake and patronizing. To be fair, there was probably no good way for him to come back from that, except perhaps to concede defeat on this point and compliment Fiorina for handling the issue like a boss.

Fiorina also dominated her exchange with Trump about their respective business careers, deftly parrying his attack on her record at Hewlett Packard (where she was fired after massive layoffs) and going on the offensive about his bankruptcies. Trump seemed somewhat restrained compared to his usual pit-bull style. That may be because going pit bull on a female opponent is almost guaranteed to make a man look bad—unchivalrous in the eyes of the more traditional-minded segment of the public, misogynist in the eyes of the more feminist contingent. In particular, questioning a female business leader’s competence can easily look sexist.

Fiorina’s conservative views are far less libertarian than mine. While her story about her stepdaughter’s drug-related death was powerful, it is a poor reason to oppose marijuana legalization. Her passionate denunciation of Planned Parenthood misrepresented the content of the recent undercover videos—though even supporters of abortion rights, among whom I count myself, should be able to agree that what those videos show is disturbing. And, much as I appreciated Fiorina’s tough response to Trump’s promise to make everything better by talking to Vladimir Putin, her apparent suggestion that we shouldn’t talk to Putin at all was rather startling.

But it’s clear that Fiorina is an electrifying and formidable candidate. Seven years ago, vice presidential candidate Sarah Palin was briefly touted as a harbinger of a Republican Year of the Woman. Fiorina, as a contender for the top spot on the ticket, may prove to be the real thing. 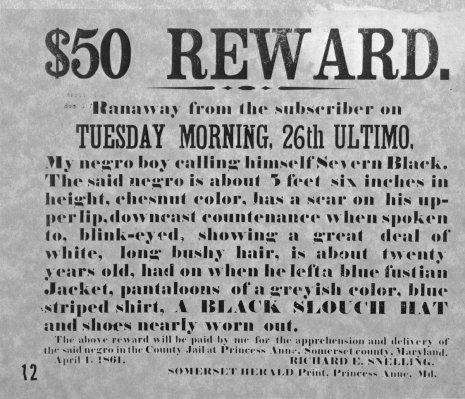 One of American History's Worst Laws Was Passed 165 Years Ago
Next Up: Editor's Pick