Watch the Cast of Modern Family Dress Up Like Breaking Bad

Eric Stonestreet and Jesse Tyler Ferguson, who star as a married couple on Modern Family, dressed up as Jesse Pinkman and Walter White for a photo shoot with The Hollywood Reporter.

Leading up to the Emmy Awards, all eyes are on Modern Family, which could earn the record for most consecutive Emmys for best comedy.

Stonestreet and Ferguson start out looking tough, like the meth-making-drug-dealers they’re portraying, but then they shift into their flamboyant Modern Family characters, flicking a cigarette and gun with the casual nature of a gay California couple, making it that much more fun to see.

The rest of the Modern Family cast recreated other hit shows, with Julie Bowen dressing as Mary Tyler Moore, Sarah Hyland as I Dream of Jeannie and the ensembled as the cast of Cheers. Ted Bundy also got back into his old Married with Children character Al Bundy with his on-screen wife Sofia Vergara dressed as Peggy Bundy. 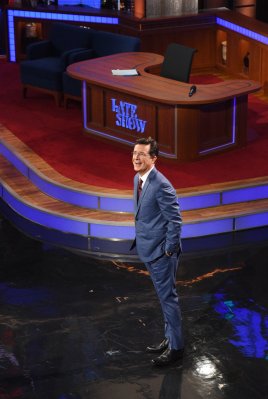 Colbert Is Losing Late-Night Ratings War to Fallon
Next Up: Editor's Pick