We’ve all heard the dangers of helicopter parenting. Remaining too involved in a kid’s life, especially throughout college, can lead to depression, lack of self-reliance and feelings of entitlement.

Superficially, this wisdom is sound. But some academics and educators now say they see signs of a troubling backlash. The concern: that the glut of pithy warnings and horror stories–the cover of Julie Lythcott-Haims’ best seller How to Raise an Adult instructs moms and dads to avoid “the overparenting trap”–is discouraging parents from getting involved at all.

“Yes, parents can be intrusive,” says Marjorie Savage, a researcher in the University of Minnesota’s department of family social science who studies college parenting. “At the same time, there are increasing examples of parents refusing to step up when students genuinely need their family.” At Hofstra University, for example, parents now ask sheepishly about mental-health and campus-safety resources, as if broaching those topics were verboten, says Branka Kristic, who heads the family-outreach programs. And Savage recalls talking to a mom who kept quiet about her son’s signs of depression until right before he failed a semester. She did not want to “helicopter in.”

That means colleges, which have spent the past decade learning to cope with parents who get too involved, now have a different problem. But the solution to both is the same: devising ways to channel moms and dads into the right kind of supportive role. Roughly 160 schools, from Virginia Tech to Vanderbilt to Arizona State, now belong to the Association of Higher Education Parent/Family Program Professionals (AHEPPP), a trade group formed in 2008 to serve “as the ever-important link between colleges, universities and their parents.” And in recent years, hundreds of colleges have either launched or beefed up their parent offices, which serve as one-stop shops for moms and dads looking to air grievances, report problems and generally stay in touch.

Much of this began, of course, because schools were forced to cope with a generation of students connected with their parents like never before. On average, they communicate 22.1 times per week, according to research from Barbara Hofer, a psychology professor at Middlebury College. That’s more than twice the rate of a decade ago, before almost every student had a smartphone. And with costs soaring–most notably at private colleges, where annual tuition now averages around $31,000 in the U.S.–university leaders have started to view parents as investment partners. “They’re stakeholders,” says Stuart Rabinowitz, president of Hofstra University, which also belongs to the AHEPPP. “Most of them have paid for this education for their children or gone into debt for this education. And in some sense, they’re entitled to know and be assured that we’re looking out for their children’s welfare.”

Crucially, outreach programs have also served as buffers, sparing students–or worse, their professors–the brunt of the nagging. At the University of Maryland, for example, the parent office has fielded demands for weekly academic-progress reports, which do not exist in higher education. “Sometimes, parents just want to know they have a place to go where someone will listen to their concerns,” says Brian Watkins, the office director.

But now, with some moms and dads wary of even contacting the school in the first place, those same programs are being used to encourage a more balanced approach, often via blogs, email and Facebook. Hofstra’s Kristic, like many of her contemporaries, advises parents to “be a guide, while acknowledging that the student owns the journey.” That means asking questions, listening to answers, being patient and trusting kids to resolve their own problems. But if issues persist, or if a student is in serious mental or physical danger, it also means hopping in the chopper, at least for a little while.

“When you think about it, helicopters are useful tools,” says Chelsea Petree, who is launching a parent-outreach program at Rochester Institute of Technology. “They can see things we on the ground can’t see and get to emergencies quicker than we can. They can swoop in when needed.

“The key is that they go back up.” 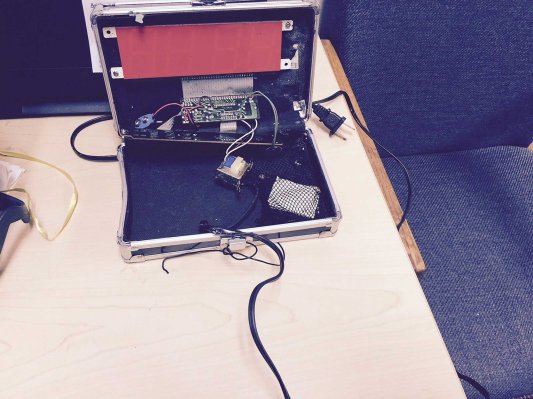 Why Kids Should Be Making Clocks in Science Class
Next Up: Editor's Pick