Carly Fiorina fought onto the main stage of Republican politics, battling her way into the primetime presidential debate and shaming a powerful cable network into changing how the candidates qualified. Once there, she never stopped swinging.

The former Hewlett Packard CEO used her turn on the stage, even at a podium on the very edge of the stage, to deliver some of the strongest criticism of her GOP rivals and the woman she hopes to face in a general election next year, former Secretary of State Hillary Clinton. The fierce business executive had polished answers prepared, witty rejoinders at the ready and a calm tone that drew first blood on the GOP front-runner for the first time this cycle.

“I think women across this country heard very clearly what Mr. Trump said,” Fiorina said dryly, alluding to Trump mocking her appearance in an interview with Rolling Stone.

Call it the anatomy of the humbling of a Trump. His face blushed. “I think she’s got a beautiful face, and she’s a beautiful woman,” he replied. Fiorina did not react. Instead, she looked out at the crowd, which remained largely silent, and the network cut to commercial as the cameras captured the stunning split-screen.

Republicans in the crowded field of hopefuls have been struggling with how to break past the bluster of Trump, the brash billionaire whose bombast has upended the rules of typical campaigns. Fiorina, perhaps, demonstrated how to go after Trump and his over-the-top tone.

Quoting a Yale researcher, Trump called her tenure at HP, “one of the worst tenures for a CEO he has ever seen.”

“She can’t run any of my companies,” he added.

Fiorina knew the criticism was coming. Before earning her spot on the main debate stage, it has been a frequent topic of questions, as it was during her failed 2010 bid for Senate in California. Never flinching, Fiorina tapped into the poise she practiced as an executive on earning calls.

“Why should we trust you to manage the finances of this nation any differently than you managed the finances of your casinos,” Fiorina replied, referencing Trump’s corporate bankruptcies, and sending him backpedaling.

It wasn’t clear if Fiorina left any lasting damage to Trump and his brand. But her own brand was certain to win a boost. For many Americans, this was the first time they were seeing Fiorina jostling with leading rivals and more than holding her own.

Aside from the technical answers about business and board rooms, Fiorina also sprinkled her personal life into her answers. When Bush and Paul sparred on drug policy, Fiorina injected herself, telling her new audience that her stepdaughter lost her battle with addiction.

“My husband Frank and I buried a child to drug addiction,” she said. “So we must invest more in the treatment of drugs … Drug addiction is an epidemic.”

Read More: Carly Fiorina Gets Personal in Her New Book

Republican voters have seemed ready to reward non-traditional candidates so far this year. Trump is atop the polls, followed by retired neurosurgeon Ben Carson. Neither has ever held elective office. Fiorina, now getting her shot, is primed to pitch herself as another outsider. Already there are indications in early state polls that her message is resonating.

And when she is in her moment, her years in corporate presentations comes through. Fiorina was ready. Before the debate, she played solitaire on her smartphone in a luxury trailer that served as her holding room while the also-rans debated. In her opening statement, Fiorina introduced herself as the former secretary-turned-CEO, and her husband as a tow truck driver who became an executive.

When asked which woman should be added to U.S. currency, Fiorina rejected the suggestion. Women, she said, are a majority in the country and should not be treated as a special-interest group that needs pandering. It drew applause.

Toward the end of the debate, moderator Jake Tapper asked each candidate what their Secret Service codename would be. Fiorina turned to the story of a Triple Crown winner who beat expectations and was incidentally owned by a woman. “Secretariat,” she said with a smile.

Read Next: Here’s What the Republicans Would Pick for Secret Service Codenames 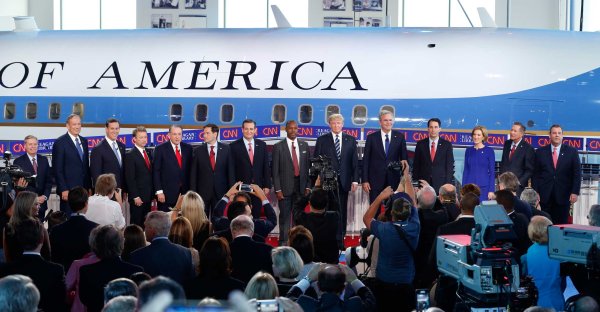 Here's Who Republican Candidates Would Put on the $10 Bill
Next Up: Editor's Pick