When it came to Twitter followers, there were two clear-cut winners of Wednesday’s debate: Carly Fiorina and Ben Carson. The two outsider candidates shot past the rest of the field, gaining 22,000 followers each.

Fiorina, the former CEO of Hewlett Packard, was enjoying a move up to the big leagues, having been promoted from the undercard debate to the main event. She jumped from 493,000 to 515,000 by the end of the debate. After surging in the polls in recent weeks, Carson, a retired neurosurgeon, went from 602,000 to 624,000 followers.

Directly behind those two was frontrunner Donald Trump, whose added 10,000 followers to his already massive total of 4.16 million. Florida Sen. Marco Rubio and former Florida Gov. Jeb Bush each gained 7,000.

At the back of the pack were Ohio Gov. John Kasich, Kentucky Sen. Rand Paul and Texas Sen. Ted Cruz, who added 3,000 followers a piece.

The rest of the 16 GOP presidential candidates made only marginal gains, except former Pennsylvania Sen. Rick Santorum, whose follower count remained flat at 242,ooo. 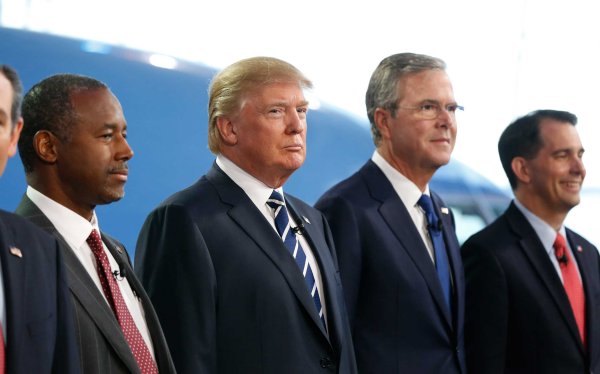 Watch the Republican Debate in Less Than Three Minutes
Next Up: Editor's Pick