It was vintage Lindsey Graham: pragmatic and level-headed, refusing to pander, wisecracking his way to the next political fight.

The undercard debate of also-ran candidates Wednesday gave the three-term Senator from South Carolina a chance to shine before a national audience. In his slow, Southern drawl, punctuated with self-deprecating asides, the 60-year-old lawmaker took a measured approach that stood out in contrast to the bomb-hurling rivals.

“I wasn’t the best law student. By the end of this debate, it would be the most time I’ve ever spent in any library,” Graham said to chuckles at the debate hosted by CNN at the Ronald Reagan presidential library.

Graham knew his role in the four-man debate against former New York Gov. George Pataki, former Pennsylvania Sen. Rick Santorum and Louisiana Gov. Bobby Jindal, and he played it well. As the only Washington insider on stage, Graham proudly carried the banner of Establishment Republicans in a campaign that’s been increasingly hostile to that crowd.

As a supporter of immigration reform, he warned the Republican Party of the damage it is doing with Hispanic voters by appearing hostile to their interests during debates on the issue. (“In my world, Hispanics are Americans,” he said.)

As a sitting senator, he rejected the suggestion that Republicans should force a government shutdown to achieve their policy goals on things like cutting funding to Planned Parenthood, arguing that there’s no way President Obama would cave.

And as a pragmatist, he argued that the Supreme Court’s decision trumps his personal feelings about gay marriage.

It’s too early to tell if the debate helped Graham’s campaign. He clearly had the best reaction from the audience in the room, earning some hearty laughs, and he generated the most search traffic on Google during the debate.

Read More: Here Are the Funniest Lindsey Graham Jokes from the Undercard Debate

Graham appeared on a show with fewer eyes than the main event but with stakes that were just as high. The next debate, hosted by CNBC in Boulder, Colo., next month, is unlikely to have an undercard debate, according to several campaigns. If Graham can’t break out of the low end of the field in the polls, this will be his last appearance.

As rivals won cheers for criticizing Democrats, Graham pledged cooperation. “That’s the first thing I’m going to do as president, we’re going to drink more,” Graham said from the stage, arguing that lawmakers don’t socialize enough. He said a Graham Administration would work with Democrats to reinforce long-term programs such as Social Security and Medicare.

That practical approach extended elsewhere. Graham steadfastly opposed using the so-called “nuclear option” to defund the controversial women’s health group, saying it would only lead to a veto from President Obama and set the GOP up as the potential sponsors of another government shutdown.

“If we can’t defund Planned Parenthood now — it is time to be done with the Republican Party,” Jindal said.

That type of rhetoric won criticism from Graham. “To say things that were said tonight were not honest or fair to the American people or the Republican Party,” he told reporters after the debate.

Graham took shots at President Obama’s foreign policy, asking “how do you sleep at night” over the situation in Syria, and criticized frontrunner Donald Trump’s lack of specifics about how he would lead the nation, especially during a foreign policy speech Tuesday night in Los Angeles.

“What I heard last night is the Cartoon Network: ‘Ooh, I’m big, I’m strong, we’re going to hit them in the head,’” he said.

It was a night-and-day reversal for Graham from last month in Cleveland, when he attempted to appear more presidential by hiding his trademark humor, but ended up sounding bloodless. At the Reagan Library, Graham was himself, mixing self-deprecating jokes with jabs at his rivals.

“He got some preparation and he got some passion,” Graham debate adviser Brett O’Donnell said. Or, as Graham campaign manager Christian Ferry put it: “He had a good night. Lindsey Graham is going to be himself more.”

Graham’s solid showing is unlikely to move his numbers in a crowded field with candidates speaking to many of the same issues. But he vowed to continue campaigning, regardless of what the polls showed. “Send money. I hope it helps,” he joked when asked about his performance after the debate. “I stay in this race. I fight until the bitter end because troops fight. They can’t turn just around and leave.” 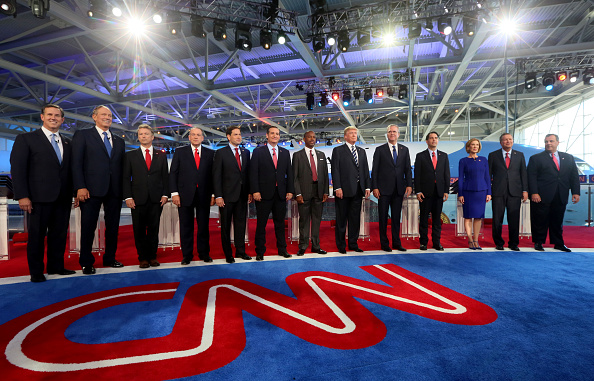 Transcript: Read the Full Text of the Second Republican Debate
Next Up: Editor's Pick