Here Are the Funniest Lindsey Graham Jokes from the Undercard Debate

Sen. Lindsey Graham rebounded from a sluggish performance at the last undercard debate with a number of one-liners that made the audience laugh.

Here are some of the zingers from the South Carolina Republican at the second undercard debate Wednesday:

On being at the undercard debate

“One, thanks, CNN, for having people at this debate.”

“There are no Democrats here tonight. If you’re here, raise your hand. You went to the wrong (debate).”

On his Southern accent

“We’re not going to deport 11 million people here illegally, but we’ll start with felons, and off they go. And, as to the rest, you can stay, but you got to learn our language. I don’t speak it very well, well, look how far I’ve come?”

“(Former South Carolina Sen.) Strom Thurmond had four kids after he was 67, if you’re not willing to do that, we’ve got to come up with a new legal immigration system.”

On his time at the University of South Carolina law school

“I wasn’t the best law student. By the end of this debate, it would be the most time I’ve ever spent in any library.”

On how Ronald Reagan used to drink with Democratic leaders

“He sat down with Tip O’Neill, the most liberal guy in the entire House. They started drinking together. That’s the first thing I’m going to do as president: We’re going to drink more.” 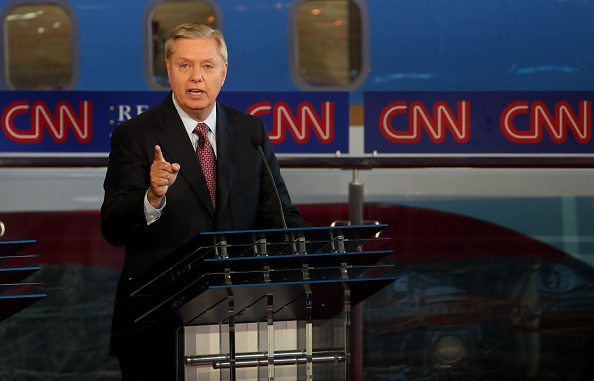 Lindsey Graham Won Google During the GOP Undercard Debate
Next Up: Editor's Pick