Jewel may be the strangest normal person in recent pop-culture history. Part of it’s her output: The singer, Alaska’s most famous resident in the years before Gov. Sarah Palin, started as a folk singer whose strummings filled the gap of “authenticity” in the mainstream market and got her into the “TRL” universe alongside the Backstreet Boys. Her book of poetry, A Night Without Armor, came out some two years after her Video Music Award, and then she pivoted to dance-pop, children’s music, and contemporary country music. (She’s a country artist today, and recently released a duet with Dolly Parton.) But while she’s not the only artist whose music has shifted genres—Taylor Swift made the opposite journey from Jewel’s, in less time—she’s one of the few who seems not just at odds with but confused by the pop culture universe in which she prospers.

The singer has just released a memoir, Never Broken, which takes its name from a lyric in perhaps her biggest hit, “Hands.” That song, about the power and strength of the individual, became one of several to take on totemic power after Sept. 11, 2001, a fact Jewel only learned when she emerged from a secluded camping trip later in the week. Never Broken, in its narration of Jewel’s career, is full of seemingly missed moments. Bob Dylan takes a shining to her and gives her his phone number so that they can collaborate on songs; she loses the number that day and, it’s implied, never calls him. Ang Lee casts her in a Civil War drama, then tells her it’s because of her “period teeth.” (Those distinctive teeth have helped make her name. She’s never had them fixed and wrote an essay about them for Redbook in 2013.) On a private jet to the Venice Film Festival with beau Sean Penn (whose relationship with Jewel apparently began when he was on a break from Robin Wright, as Us Weekly recently pointed out), she indulges a passion she first discovered in her study of sculpture: “I tried not to make a fool of myself, but I fear I may have asked to feel people’s noses when a good one came around.” She tried!

All of these incidents occur after we’re walked through a grim childhood that might be overwritten if it were fiction. Jewel’s mother leaves; her alcoholic father can’t provide for the family but attempts to by dragging Jewel, a gifted singer and yodeler, through five-hour gigs in bars. It’s little wonder she doesn’t handle fame like someone born to it. The book’s darker aspects deal with her reconnection and ultimate break with her mother, who, in Jewel’s telling, funneled money from her and surrounded her by a cult-like band of well-paid sycophants. Jewel narrates her feelings about this severing of ties through poetry: “for you are pregnant with yourself / a new you / and it has its own gestation period.”

Jewel’s poetry has long contributed to the sense of her being vaguely unlike her contemporaries, and it hasn’t evolved much since MTV News Kurt Loder corrected the singer’s word choice in an interview. In Never Broken, Jewel writes that her widely criticized book “was exceeding everyone’s expectations—poetry was finding a mass audience in spite of an industry’s skepticism.” Including the poetry — less compellingly written than the prose by far — was an idea many editors would have advised against, and yet one that makes the book distinctively a work by Jewel.

Jewel is alternately totally at sea in the world of celebrity, and cannily aware of how differentiating herself as a naif might be to her benefit. (The final sentence of the book asks readers to visit Jewel’s website and “join the community” — humanistic and brand-building, in this Goop era.) Amidst her many moments of confusion, she casually drops references to her “manny” and explains the surprisingly savvy level of thought that went into her taking a small advance on her first contract. She hints that she may follow this volume up with one on healthy eating, and steps outside the narrative to praise, as fabulous, the gay men she meets. She describes her pop album 0304 alternately as a true expression of her mood at the time and as an opportunity to cash in amidst the precarious financial situation caused by her mother. Why should there be any divergence? By the book’s final 100 pages, the girl who sang at the bars in Alaska is formulating a business plan for promoting a children’s album (“We then went to Fisher-Price and licensed their brand […] I did an HSN special”) and pushing her new image as a country star. She tells radio promoters, “My life was a country song.”

The requisite tragedy is certainly there. But the structure of a country song is elegant and simple, while Jewel’s attempts to impose order onto her own story tend to get away from her. Never Broken wants to be the story of a young woman from the hinterlands who stumbles into various experiences and reacts just the way her reader would. But her knowledge keeps sneaking through. It’s a compelling read because Jewel has learned a great deal about maintaining the image of a person who lives on a higher plane, unconcerned with image. She can’t help grabbing for those noses, but that hardly makes her a fool. 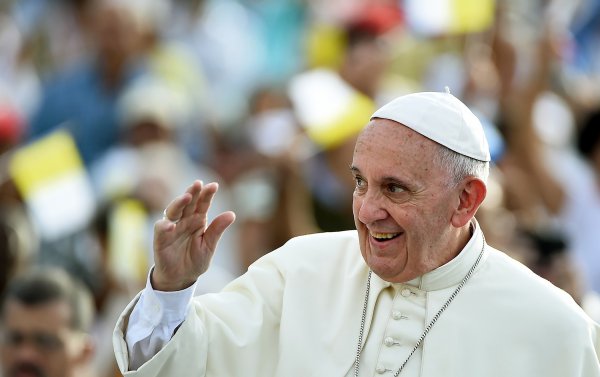 What Feminist Christians Think About Pope Francis
Next Up: Editor's Pick