So you thought it was bad last time, when Fox News tried to put you under the table with two consecutive GOP debates lasting four full hours.

At least there are commercial breaks for much needed relief. Before we get going, the usual disclaimers: Don’t actually play this drinking game. You will drink too much, and that is bad. Also don’t drink if you are underage. And never drink and drive.

With all that said, here is TIME’s guide to drink watching the second set of Republican GOP debates on CNN, starting at 6 p.m., Eastern Standard Time, 3 p.m. Pacific.

• Throw the High Life against a wall if Walker refuses to answer a question because it is “hypothetical.”

• Headstand a Sam Adams if someone says Tom Brady did not cheat.

• Hydrate with water and/or salt tablets each time Donald Trump mentions his terrific crowds, his terrific polls, how smart he is, or any other tremendous personal success.

• Sip expensive champagne if Trump tangles with moderator Hugh Hewitt over the name of a Hamas, Hezbollah, Syrian or Iraqi military leader.

MORE: Read the Full Text of the First Republican Debate

• Put your thumb over the top of the bottle and shake if Trump speaks cogently about who that person is.

• Polish off the Listerine if a candidate offers to go to jail in her place.

• Rub AXIRON, the prescription-only testosterone gel, under your arm if Bush gets into an Alpha contest with Trump and wins, and you happen to be man. (Beware AXIRON can transfer from your body to others, so don’t rub against young children or women after application.)

Take a sip for each of the following:

• Carson closes his eyes before answering a question

• Any candidate mentions an endorsement

• Someone other than Trump says “YOOOOGE”

• Any candidate mentions their father (Two sips if Bush)

• Rubio talks about the American dream

• Anyone praises the pope

• Paul talks out of turn 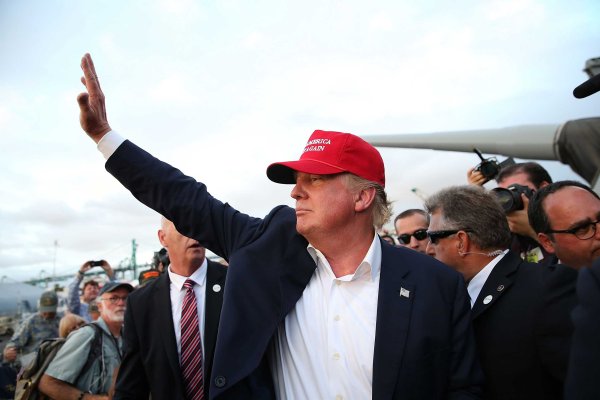 Pile on Trump
Next Up: Editor's Pick