An Oklahoma court halted the execution scheduled for Wednesday of a convicted murderer amid growing concern he may be innocent.

The Associated Press reports an appeals court halted the execution of Richard Glossip shortly before he was scheduled to be executed after his attorneys asked for time to review new evidence, including a claim by another inmate that he overheard the other man convicted in the case admit he acted alone.

Glossip was convicted of murder in 1977 after being linked to the death of Barry Van Treese. Justin Sneed, who bludgeoned Van Treese to death, said he had been paid to do so by Glossip.

But some have questioned the verdict, arguing that Sneed’s testimony in court came in exchange for a deal with prosecutors and that there is no concrete evidence linking Glossip to the crime. Sneed’s daughter recently argued in a letter that the state delay the execution, saying her father has wanted to revoke his testimony.

“One innocent life has already been taken by my father’s actions,” wrote Sneed’s daughter, O’Ryan Justine Sneed. “A second one doesn’t deserve to be taken as well.”

Another controversial aspect of the execution is its method: lethal injection. If the execution proceeds as scheduled, Glossip will be killed using a drug that has led to botched executions in the past. Three different inmates — Dennis McGuire in Ohio, Clayton Lockett in Oklahoma and Joseph Wood in Arizona — appeared to experience difficulties during executions last year when executioners used the drug midazolam. The U.S. Supreme Court upheld the legality of using the drug in June.

“I am worried they will botch it again,” Glossip told CNN.

However, family members of Glossip’s alleged victim have said the execution should proceed. The victim’s son, Daniel Van Treese, told NBC News that Glossip’s defenders “have more money than sense,” and were pushing an agenda. “Let us get on with our lives,” said Van Treese. 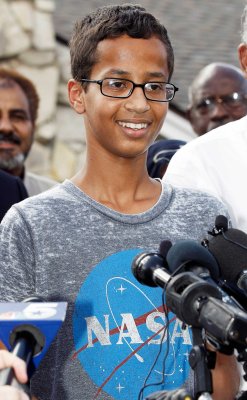 #IStandWithAhmed Hashtag Protests Arrest of 9th Grader Who Brought Clock to School
Next Up: Editor's Pick