Christian schools have accused the state of Israel of discrimination against them by threatening to cut their funds unless they agree to allow themselves to be controlled by the state.

Staff and 33,000 pupils have gone on strike in protest across Israel. Instead of greeting each other in the school yard, students, teachers and parents are setting up protest tents everywhere from Haifa to Jerusalem as part of a nationwide strike over crippling budget cuts that deal what many term a “death blow” to the future of Christian schools in Israel.

According to a 2011 census, Christians make up just over 2% of the population of Israel but Christian schools also cater for some Muslims and Druze, who make up 18% of the population. The Jewish majority are mostly educated in secular state schools but with a large minority attending ultra-orthodox Jewish schools. Christians are almost all Arabic speaking and their churches include protestant, catholic and orthodox.

The Israeli government see Christian schools as ‘recognised but unofficial’ and provided up to 75% of their funds, with the remainder acquired through tuition fees. But over the past few years, state funding has fallen to 29%, notes Father Abdul Massih Fahim, director general of the Christian schools network. Moreover, the state has imposed a cap on school fees.

“So on the one hand, we have 45% cuts over these years, and on the other, they are putting limitation to raise tuition fees”, says Botrus Mansour, the general director of Nazareth Baptist school.

Neither the prime minister nor the education minister have publicly commented on the strike. In response to a query by TIME, the education ministry said that it is “in constant and continuous contact” with representatives of the Christian schools and that last week a meeting was held between them and representatives of the ministry. “The school officials rejected all proposals brought before them,” says Hagit Cohen, a spokeswoman for the ministry.

“We will lose our control, message and our identity,” he says, adding that under the proposed regulation, the state would be responsible for appointing teachers and principals, as well as choosing the students.

Christian school leaders, Israeli NGOs and politicians accuse the government of discrimination. “We believe it is outrageous how the Israeli establishment is behaving with our schools,” says Wadie Abu Nassar, Advisor to Catholic Bishops of the Holy Land. Several ultra-orthodox Jewish school networks are also classified as ‘recognised but unofficial’ but still receive full funding from the state, Nasser points out, although some do not teach even basic subjects such as maths and science. “There are networks for Jewish ultra-orthodox schools that the state does not dare to touch,” says Nassar. “This is a clear discrimination.”

Although Christians make up just over 2% of Israel’s population, their schools — attended by Muslims, Christians, Druze and even Jews — are among the best in the country.

Whereas most Arab students perform much worse than their Jewish counterparts, Arab students at Christian schools do far better. “Almost a third of Arab university graduates and an absolute majority of Arab high-tech workers are graduates of the very schools that the government is now trying to paralyse”, Ayman Odeh, the head of the Arab faction in the Israeli parliament, told the Israeli daily Haaretz. “It’s impossible to talk about development and equal opportunity on one hand, but on the other hand harm the very schools that are succeeding in breaking the glass ceiling.”

On Wednesday, Israeli President Reuven Rivlin hosted a delegation of European bishops who asked him about the strike. “I’m not so sure that they can get everything that they demand – but most of the things they demand,” Rivlin told a bishop from Prague following the press conference. “These are the best schools in Israel”.

As protests continue, the Christian leadership said it is considering shutting down key Christian sites around the country. On 7th September, 450,000 students from Israeli Arab schools across the country joined the strike in solidarity.

“These schools are not asking for a lot of money,” says Nassar. “We are asking for about 200 million NIS ($50 million) per year [for all 47 schools]”, adding that the state also saves money as the maintenance of the school buildings is provided by the churches.

So far, the Education Ministry has proposed a combined allocation of 20 million shekels ($5 million) for all 47 schools. “The state of Israel just reduced the taxation on beer by 46 percent,” says Nassar. “So come on! […] A state that respects itself behaves differently.” 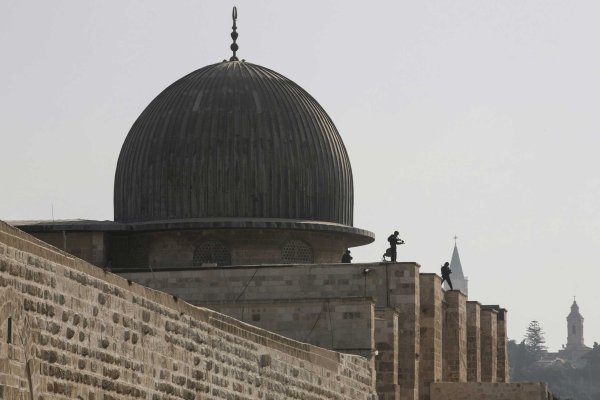 6 Reasons Why Jerusalem's Old City Has Once Again Enflamed the Region
Next Up: Editor's Pick