Comedian Steve Rannazzisi, a star of the FXX show The League, has admitted to fabricating a story about escaping the World Trade Center during the attacks on Sept. 11, 2001.

The 37-year-old had previously said he worked at Merrill Lynch as an account manager on the 54th floor of the south tower and fled the building minutes before a second plane crashed into it, the New York Times reports. In interviews over the years, he has said the experience inspired him to leave New York and move to Los Angeles to start an entertainment career.

In a statement provided to the Times by his publicist, Rannazzisi confirmed on Tuesday that he was not in the World Trade Center that day: “I don’t know why I said this. This was inexcusable. I am truly, truly sorry.”

The Times says it presented Rannazzisi with evidence that called his account into question a day before his admission. (Merrill Lynch did not have offices in either World Trade Center tower and has no record of employing Rannazzisi.) Buffalo Wild Wings, which has featured Rannazzisi in ad campaigns, told the paper it was “disappointed” and “currently re-evaluating [its] relationship with Steve pending a review of all the facts.”

Rannazzisi’s full statement is below: 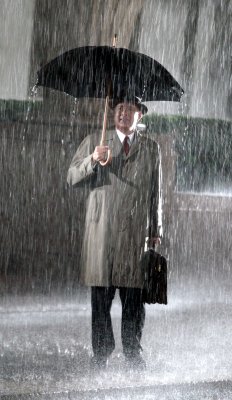 Watch the New Trailer for Bridge of Spies Featuring the 'Standing Man'
Next Up: Editor's Pick