The Republicans’ second presidential debate is shaping up to have all the hallmarks of a Hollywood blockbuster: drama, high-speed collisions and, of course, the fiery explosions. Donald Trump, of course, is getting the star billing at the CNN production.

The White House hopefuls are set to clash—and maybe crash—Wednesday at the Ronald Reagan Presidential Library near Los Angeles for a pair of back-to-back forums, split among those who are polling atop the field and the also-rans. As with their first forums, all eyes will be focused on Trump, the brash billionaire who is leading polls and in potshots aimed at his rivals.

Inside rival campaigns, advisers are all trying to come up with a plan to deflate Trump. During the first debate, most tried to keep Trump at arm’s length and, with the exception of Sen. Rand Paul of Kentucky, none tried to confront Trump on his thin record as a Republican. That approach worked for the first session, but it’s not a winning strategy going forward, especially with Trump outpacing more serious candidates in the polls by factors of three or four.

“We kept waiting for him to do himself in. That hasn’t happened, so it’s time to help that process along,” one adviser to a Trump rival said. Added a second campaign’s strategist: “If we don’t as a party change our posture, we’re looking at another President Clinton. Hillary will beat Donald Trump in 49 states if he’s our nominee. And I’m not sure she doesn’t pick up Texas, too.”

Ahead of the debate, to be held beside Reagan’s retired presidential airliner, candidates were already trying out their attacks. “If you don’t know the answer to these questions, then you are not going to be able to serve as commander and chief,” Florida Sen. Marco Rubio said, pointing to Trump’s struggle to answer questions about foreign policy. “There’s nothing behind the curtain,” Sen. Lindsey Graham of South Carolina says of Trump. Louisiana Gov. Bobby Jindal was even more direct, calling Trump a “madman.”

None is as irked by Trump as former Florida Gov. Bush and his advisers. Through the summer, Bush’s team insisted they keep focused on the slow slog of building traditional campaign support with town hall-style meetings, business roundtables and stops to meet voters casually. Each passing poll found support crumbling as Trump hammered Bush as another establishment pawn.

Finally, Bush started firing back, piqued that Trump continuously calls him “low-energy.” “Look, this guy is the frontrunner,” Bush said during a stop in Virginia. “He should be treated like a frontrunner, not some kind of alternative universe to the political system.”

The remark was a hint that Bush is eager for Trump to face tough questions about his record. Bush’s team has been scouring Trump’s business records, previous statements and political giving. “Trump is going to see what low-energy looks like,” said one Bush adviser who is not on campaign payroll.

Other campaigns, too, were sharpening their lines of criticism again Trump, who for the first months of the campaign was treated largely as a political oddity and not legitimate contender. A pile-on—or a pile-up—could be in the works if it looks like Trump is knocked off balance by a question. The most obvious candidate for fireworks will be Trump’s comment about the only woman in the race.

Trump drew widespread criticism when he said of former Hewlett Packard CEO Carly Fiorina: “Look at that face! Would anybody vote for that?” Advisers to rival campaigns say they will take their cues from Fiorina, who used a winning show in last debate’s undercard matchup to claw her way into the top-tier forum. Fiorina is poised with her barbs and has been practicing how to capitalize on Trump’s rudeness.

But, Trump’s rivals acknowledge, there is an inherent risk of criticizing Trump. His supporters are rallying behind Trump because he is such an outsider. An insider’s attack is only going to reinforce Trump’s supporters’ belief that he could genuinely upend the Washington gridlock they profess to loath. And Trump has proved himself a skilled debater; his counter-punch is stronger than anyone’s on that stage.

“The polls are really looking good,” Trump tweeted as he arrived in Los Angeles. “#1 everywhere despite all lobbyist & special interest $ being spent against me.” 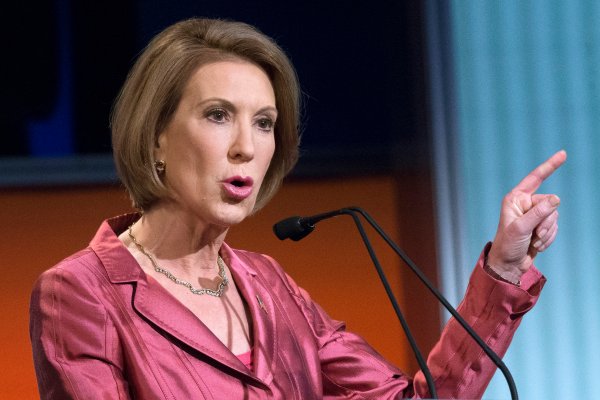 CNN Amends Republican Debate Rules To Include Carly Fiorina
Next Up: Editor's Pick