When Tainted Peanuts Could Mean Life in Prison

The most severe penalty ever given to a person involved in a food safety case—life in prison—may be around the corner.

Next Monday, Stewart Parnell, former CEO of the peanut processing company Peanut Corporation of America (PCA) will find out if he is going to prison, possibly for a very long time.

In 2009, PCA—which sent peanuts and peanut butter to a variety of food manufacturers and distributors—was identified as the source of a massive salmonella outbreak that started in 2008 and resulted in hundreds of sick Americans (half of them kids) and at least 9 deaths.

In legal proceedings, the U.S. government presented evidence revealing that Parnell and the other defendants “misled customers about the presence of salmonella in their products.” Prosecutors showed fabricated certificates of analysis (COA), which are meant to summarize lab results regarding pathogens in food, were sent along with peanut shipments. Sometimes the food had not been tested but still had a COA that said the product was negative for bugs.

Parnell was subsequently convicted a year ago on more than 65 counts of conspiracy, mail and wire fraud, obstruction of justice, and more. He became the first executive to be convicted of a federal felony for a foodborne illness case.

The Centers for Disease Control and Prevention (CDC) estimates that each year roughly 48 million Americans get sick, 128,000 are hospitalized, and 3,000 die of foodborne diseases. In 2013 alone, there were 818 distinct foodborne disease outbreaks, which caused 13,360 illnesses, 1,062 hospitalizations and nearly 20 deaths. Close to 420 people in the U.S. have become sick in an ongoing contaminated cucumber outbreak.

Parnell’s sentencing is scheduled for Sept. 21 in Albany, Georgia, and the U.S. Probation Office has calculated that his actions add up to a life sentence. For two other employees—one of them his brother—the jail time could be more than eight years based on federal calculations. The judge is expected to uphold a lengthy sentence.

Parnell’s defense team maintains that he was merely “doing exactly what the rest of peanut industry was doing at the time,” says Ken Hodges, an attorney for the defendant. “Neither he nor the peanut industry appreciated the significant problems that salmonella could cause. There is no way he believed for a moment that his product was harmful.”

For family members of those who died from eating contaminated peanuts, this sentencing is coming not a moment too soon. “For six years I’ve had to listen to rhetoric from defense claiming no responsibility whatsoever,” says Jeff Almer, whose mother Shirley Almer died in the outbreak. Shirley had recently survived brain cancer when she ate the contaminated peanut butter at a hospice care center. “She had beaten cancer and what took her life was peanut butter,” Almer says.

Some food safety lawyers are puzzling over why some cases are taken to court and others are not. In the last three years, there have been four major cases in which U.S. prosecutors have achieved convictions for foodborne outbreak cases. In 2014, brothers Eric and Ryan Jensen of Jensen Farms received five years probation and $150,000 each in fines for their role in a cantaloupe listeria outbreak that sickened more than 140 people and killed more than 30. In 2015, Austin “Jack” DeCoster and his son Peter DeCoster of Quality Egg LLC were sentenced to three months in jail for a 2010 salmonella outbreak, which they are appealing.

But legal action appears to be applied unevenly, say some on the field. “If you’re charging the DeCosters and the Jensens, what about the people behind the current cucumber outbreak that has 341 people sick and two dead? Is there a threshold? Do you have to kill 10 or 20 people?” says Bill Marler, a food safety lawyer. “One of the things that the FDA and U.S. attorneys are going to have to struggle with is, if you go down this road, how far are you going to go? That’s the dialogue that the public and prosecutors need to have.”

Though the U.S. Department of Justice (DOJ) would not comment on Parnell’s case specifically, Benjamin C. Mizer, principal deputy assistant attorney general for the DOJ’s Civil Division, told TIME that the DOJ treats food safety threats like any other threat to public safety. “We follow the facts and law where they lead us. If an individual or corporate entity has shown particular culpability, then that strengthens the evidence we have for pursuing criminal charges, whereas if an entity immediately recognizes a problem and takes steps to ameliorate the problem and works with us, then that may be an instance in which public health and safety is already being sufficiently protected and it may not warrant criminal charges and there may not be evidence to support criminal charges,” says Mizer.

This has food manufacturers spooked. While speaking to industry members at several recent food safety conferences, Marler says he’s witnessed many moments of panic. “People are going, Really? I could be charged with a crime?’” he says. “There’s no question that this is on people’s radar. I see people talking about Stewart Parnell and saying, That would never happen to me, but then they look at DeCoster or Jensen and think, Wait a second, that could easily happen to me.”

Shawn Stevens, a global food safety attorney, says there’s lots of “chatter and whispering” among company leaders over what the consequences could be if adulterated food is shipped and sold. “I think the FDA is just beginning to dip its toes in the water as it relates to how much and how often it will in fact use criminal sanctions,” he says.

The role of regulators is murky

The U.S Food and Drug Administration’s (FDA) Food Safety Modernization Act, which was supposed to give the FDA food safety muscle, has not received even close to the funding the agency was hoping for. Funding for the Act is more than $276 million behind where it needs to be, according to Politico, and some experts argue this could lead to even more criminal prosecution as a means to create deterrents.

“In an environment where the [FDA] is not getting the dollars it would like to aggressively enforce regulation across the board, I think it will pick some of the more high profile cases, bring criminal charges, and then use the media attention as a tool to show the public and corporate America that the agency is really serious about food safety,” Stevens says.

Mizer says the DOJ is sending a signal to the industry: “One of the very goals of criminal prosecution whether in the food safety arena or elsewhere is to deter bad conduct,” he says. “We can help keep American consumers safer by making sure individual corporate officers understand that they will individually be held accountable for wrongdoing. We’ve seen an increasing number of prosecutions in this arena, and I think we are doing everything we can to make sure that what the law calls adulterated foods are not being introduced into the food chain.”

Most Popular on TIME
1
Read Donald Trump's Full Inauguration Speech
2
Federal Prisons on Lockdown Ahead of Inauguration
3
Why Is America So Divided Today? 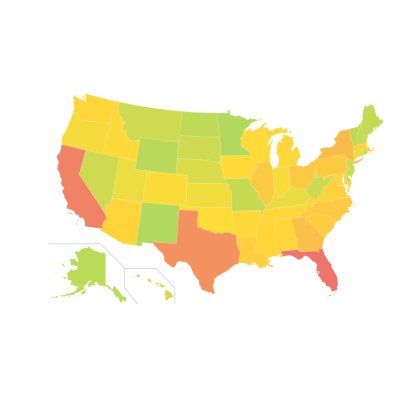 This Map Shows Where Salmonella Has Hit Hardest in 2015
Next Up: Editor's Pick