What Does It Take To Call Something a Hate Crime?

In this photo provided by The Sikh Coaliton, 53-year-old Inderjit Mukker is seen at a hospital in Hinsdale, Ill., on Sept. 8, 2015.
The Sikh Coalition/AP
Ideas
By Kamal S. Kalsi
Major Kamal S. Kalsi serves in the 404th Civil Affairs Battalion at Ft. Dix and as the EMS Medical Director at St. Clare's Health System in New Jersey.

Inderjit Singh Mukker, a Sikh man who sports a beard and turban as part of his faith tradition, was driving to a grocery store in the suburbs of Chicago last week when he was brutally assaulted and beaten unconscious by a man who called him “Bin Laden” and yelled, “Terrorist! Go back to your country!”

The DuPage County State’s Attorney Robert B. Berlin originally charged the accused teen with felony aggravated battery, but not with a hate crime, which fueled outrage among Sikh Americans. An online petition on Change.org demanding that the county reverse its decision quickly garnered more than 12,000 signatures. On Tuesday, just before a community rally and a news conference organized by the Sikh Coalition, DuPage County informed the public that the suspect will also be charged with a hate crime.

Why does it take an entire community to demand justice for one of their own?

Mukker paid a price that many Sikhs in post-9/11 America have become painfully aware of: Sikhs have become easy targets. More than 300 hate crimes against Sikhs were reported in the months following 9/11, according to the Sikh Coalition. Balbir Singh Sodhi was killed on Sept. 15, 2001. In 2012, an attack took the lives of six Sikhs at their house of worship in Oak Creek, Wis. Just last month in Peoria, Ill., Satwinder Singh Bhola, a Sikh whose daughter serves on active duty in the U.S. Navy, was stabbed to death by an assailant who has yet to be found.

In today’s turbulent political climate, anti-immigrant rhetoric can help fuel attacks against a minority that appears different. Race is a tinder box that ignites quickly. The Bureau of Justice Statistics report on 2012 hate crimes showed an increase in hate crimes for certain minorities.

Even while we struggle to understand the reasoning behind such crimes, recognizing and condemning hate violence is an important first step. It is my hope that we will be able to use the outrage over Inderjit’s vicious beating to fuel a moment of national introspection to place these senseless acts of violence within the context of the historical legacy of slavery, immigration, and the current militarization of civilian life.

Sikh Americans have pushed back against hatred through a tradition known as “seva.” Seva is not simply service; it’s selfless service. It is a kind act of love that doesn’t ask for anything in return. It’s not always safe, and it can involve volunteering to join the military, as I did. When I took care of injured Marines on the front lines in Afghanistan, nobody cared that I had a cool camo turban and beard.

Seva demands we stand up for those who don’t have a voice. These Sikh values are also American values. It is time that we celebrate diversity in our ranks and push back against the hate and ignorance that continues unchecked.

Major Kamal S. Kalsi, D.O., U.S. Army Reserves is the first Sikh soldier in a generation to be allowed to serve in the military with his turban and beard in uniform. He currently serves in the 404th Civil Affairs Battalion at Ft. Dix and as the EMS Medical Director at St. Clare’s Health System in NJ. 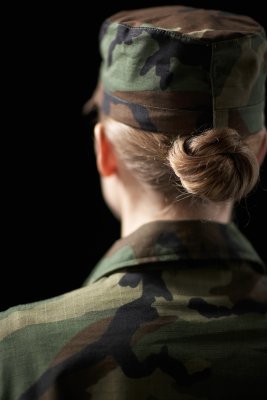 Photo of Soldiers Breastfeeding in Uniform Goes Viral
Next Up: Editor's Pick