'Dancing with the Stars' is back with an all-new celebrity cast ready to hit the ballroom floor. The competition begins with the two-hour season premiere on the ABC Television Network.
Adam Taylor—ABC
By Melissa Locker

This season is filled with the usual Whitman’s Sampler of D-list celebrities with a diva (Chaka Khan), a chef on a redemptive track (Paula Deen), a Triple Crown winning jockey (Victor Espinoza), a next wave social media star (Hayes Grier), an American hero (Alek Skarlatos), a celebrity scion (Bindi Irwin), a Real Housewife (Kim Zolciak), a boy bander (Nick Carter) and naturally, Gary Busey. Plus a whole bunch of stars who will require some rapid fire Googling (like Alek Skarlatos), who are all ready to dance their way into the judges’ hearts and the voters’ good graces. There’s a long road ahead and at the end is a shiny Mirror Ball trophy.

Karina Smirnoff and Victor Espinoza: Since the Triple Crown winning horse American Pharoah wasn’t available for the show, DWTS had to settle for jockey Victor Espinoza, who showed up for his ballroom debut in a sequined horse-riding helmet. While Victor has never danced before — and has what looks like a foot height difference with Karina — he still manages to pull off a reasonable salsa. Julianne Hough was please with how flexible he was, because she thought there would have been more of a “stiff situation going on down there.” Carrie Ann Inaba and Bruno Tonioli just shook their head sadly at Julianne’s attempted use of a double entendre. Leave it to the professionals, honey! Victor got a meager 15/30

Tamar Braxton and Valentin Chmerkovskiy: R&B singer and The Real co-host Tamar Braxton was teamed up with the current DWTS champion, Val Chmerkovskiy, which means expectations are high for her, but less so for Val who seemingly gave up grooming for Lent and never went back. Clearly the Mirror Ball trophy went straight to his head. Their first dance was a quickstep and, despite the lack of hair gel, Val is a good teacher and Tamar pretty much nailed the complicated routine. The judges were impressed and scored accordingly. 23/30

Chaka Khan and Keo Motsepe: Since Chaka Khan is a legend she is forgiven for opting to dance her cha cha to her own song, “I Feel For You.” It’s a good way not only for an aging star to earn a little extra for her 401K, but also to remind the kids these days (who might also be potential voters), what exactly she is famous for. Carrie Ann was awestruck, because “I Feel For You” was her jam in high school, but she couldn’t help but to point out that Chaka forgot the choreography. “Don’t even trip,” said Chaka, and Carrie Ann promised not to. Julianne and Bruno were less impressed, but Chaka promised to work harder next week. If there is a next week. 13/30

Hayes Grier and Emma Slater: 15-year old Hayes Grier is a Vine star with over eight million social media followers, a number that almost made host Tom Bergeron salivate at the retweet potential. Hayes has no dance experience, though, and according to Emma he “dances like a T. Rex,” but she promised to whip him into shape to impress the ladies on Vine. Their first routine is a surprisingly slow-paced cha cha set in a high school locker room soundtracked by Omi’s “Cheerleader” (of course). Bruno said he could watch Hayes for “more than six seconds,” which is a compliment, maybe. Carrie Ann couldn’t help but do the math and realize that even if she was 30 years younger she would still be way too old for him. 21/30

Andy Grammer and Allison Holker: Last season, DWTS had a love affair with Andy Grammer’s song “Honey, I’m Good” and now Andy is on the show. In the show’s first tragic back story, he explains that he decided to put the brakes on his singing career and any momentum he had from his chart topping single to pay tribute to his dance-loving mother who passed away. All together now: Awwww. His foxtrot to “Marvin Gaye” by Charlie Puth was a solid first effort. 21/30

Paula Deen and Louis Van Amstel: As Paula Deen attempts to claw her way back into the spotlight after accusations of racism toppled her culinary empire, a turn on Dancing with the Stars was perhaps inevitable if inadvisable. Her first dance was the quick step, which is a tough routine to pull off out of the gate, and Paula looked like she was terrified as she was pulled around the dance floor by Louis. At the end of the performance, Paula leaned into Tom’s microphone and announced, “I started with white underwear, but it probably ain’t white no more — I was scared!” Tom wisely side stepped away form her, while Carrie Ann just sadly said, “TMI.” 15/30

Carlos PenaVega and Witney Carson: The Big Time Rush star and singer Carlos PenaVega is teamed up with Witney Carson, who won the Mirror Ball with Alfonso Ribeiro a few seasons back. That’s all well and good, but the real reason that Carlos is on the show is to crush his wife who is also competing, because there is nothing like a very public competition to build a strong foundation for a long lasting relationship. He is a good dancer, though, thanks to all the practice on the Nickelodeon set. Julianne crowned him The Most Natural Performer of the night. 23/30

Alexa PenaVega and Mark Ballas: Alexa is the other half of the show’s first-ever married competitors. While Carlos has more dance training, Alexa is a more well-known actress, thanks to her role as Carmen Cortez in the Spy Kids franchise. Bruno loved her spicy routine, but it’s hard to guess how long this weird experiment will go on — or how awkward their home life will be when one of them is inevitably kicked off. 22/30

Kim Zolciak-Biermann and Tony Dovolani: The Real Housewives of Atlanta star may have delivered six children, but she only managed to deliver a lackluster performance on the dance floor. It was clearly nerves, so Carrie Ann tells Kim that she’s too beautiful to hold back. Julianne said the routine was “slow motion” and mentioned that her sister also has six kids and is fierce and she expects the same from Kim. Kim starts crying, so Erin Andrews to cheer her up, she tells Kim that her husband’s football team is up at the half. Kim then claims she feels like she’s cheating on her husband by dancing with Tony, which is a weird excuse, but probably the best she could do under pressure. The judges all optimistically tell Kim that she’ll improve next week. 12/30

Bindi Irwin and Derek Hough: Five-time champion Derek Hough has once again been teamed up a pint-sized firecracker of a partner, this time in the form of The Crocodile Hunter heir Bindi Irwin, the 17-year old wildlife conservationist and star of Bindi: The Jungle Girl. Their speedy routine was set to Elton John’s “Crocodile Rock” because the producers just couldn’t help themselves. Bruno immediately dubbed her “the wonder from Down Under” while Julianne called it “the best performance of the night,” which it was. 24/30

Gary Busey and Anna Trebunskaya: It’s clear that Anna Trebunskaya drew the short straw this year since she was teamed up with Gary Busey, who might not even realize he is on this show. That said, people might choose to keep him around just to see what might happen, because it’s a live show and the censor’s thumb might not be fast enough on the button. At the end of the routine, Gary Frankenstein walks over to talk to Tom for the debrief. “When I’m talking to you, your left eye is spinning,” said Busey. “That and my career,” deadpanned Tom. The judges claim they were entertained by the routine and actually gave Gary Busey higher scores than Kim Zolciak, which has got to hurt (for Kim, Gary is undoubtedly immune to pain). 15/30

Alek Skarlatos and Lindsay Arnold: The producers are very aware of the fact that Alek Skarlatos is not a household name, so they immediately have him introduce himself as an Army National Guard Specialist who, along with two of his friends, overpowered a gunman on a train in France. For his act of bravery, he was awarded France’s highest honor, and America’s too, which is being invited to be the 13th member of the cast of Dancing with the Stars. He is a surprisingly good dancer, though, and could go further than anyone would have expected. 22/30

Nick Carter and Sharna Burgess: The once and future Backstreet Boy Nick Carter is paired with his biggest fan, Sharna Burgess, who does her best not to squeal when she finds out she’s been paired with the guy who was on all the posters on her bedroom wall. Nick claims that he is wildly insecure about his dancing, but he’s definitely in this competition as a ringer. Just wait until he dances to a Backstreet Boys’ song and the phone lines are overloaded with eager voters. Julianne can’t stop giggling, because she’s a fan, and Bruno does his own “Backstreet’s back!” dance, because he can’t help himself. Only Carrie Ann is immune to his charms, but he still ties for the highest score of the night. 24/30.

Best Reason To Come Back Tomorrow: The votes will be in and someone is going home. That’s right, while it’s only the beginning, the end is nigh. 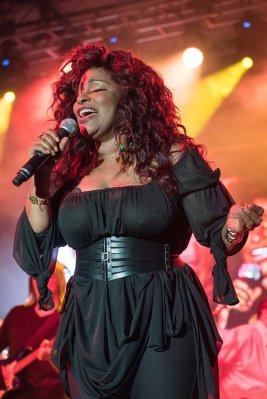 Chaka Khan Set To Compete in <i>Dancing With The Stars</i>
Next Up: Editor's Pick