Supreme Court Justice Stephen Breyer testifies before the Financial Services and General Government Subcommittee during a hearing on the budget for the Supreme Court in Washington, District of Columbia, U.S., on Monday, March 23, 2015.
Pete Marovich—© 2015 Bloomberg Finance LP
By Ryan Teague Beckwith

Should the Supreme Court care that other countries have abolished the death penalty?

That looming question animates Justice Stephen Breyer’s “The Court and the World,” a brisk but academic book that argues that it is relevant for the nation’s top judges to consider what other countries’ legal systems have decided when faced with difficult issues.

“If someone with a job roughly like my own, facing a legal problem roughly like the one confronting me, interpreting a document that resembles the one I look to, has written a legal opinion about a similar matter, why not read what that judge has said?” writes Breyer, who was appointed by President Clinton in 1994. “I might learn from it, whether or not I end up agreeing with it.”

It’s not an academic question. In recent years, members of Congress have harshly criticized justices for citing foreign courts, with one former member even suggesting it could be grounds for impeachment. Meantime, the court is narrowly divided on the death penalty, an issue where the United States bucks the trend of other advanced democracies toward abolition.

In 284 pages, Breyer explores the history of justices looking to foreign courts, the influence of America’s legal system on the world, the increase in legal questions over international agreements and the role of judges in spreading American influence.

But the heart of the book is an 11-page chapter defending the court’s citation of foreign cases. And while Breyer mentions cases involving consumer safety, desertion and gay rights, that section of the book returns again and again to court decisions on the death penalty.

That’s because one of the arguments for the court to ban the death penalty in the United States is that it violates the constitutional prohibition on “cruel and unusual punishment.” For Breyer, who called the death penalty “capricious, random, indeed arbitrary” in a dissent earlier this year, foreign practices help show how unusual it is.

According to the human rights group Amnesty International, 101 countries have abolished the death penalty for all crimes.

Breyer also notes how past cases have been shaped by world opinion, with justices barring executions for children under the age of 16, for rape that did not lead to death and for the accomplice in a robbery that led to a death. He even notes that the phrase “cruel and unusual punishment” itself is foreign since it comes from an English declaration from 1688.

He also considers — then rejects — the arguments of critics, including that citing foreign courts could undermine American sovereignty or lead judges to a lazy “nose counting” of other countries’ practices before making decisions.

Ultimately, Breyer argues, foreign decisions are just another source of information, no different than lower court decisions, “useful law review articles, books of history (and) statistical studies.” Informative, but unlike a Supreme Court decision, not binding.

Read Next: The Death of the Death Penalty 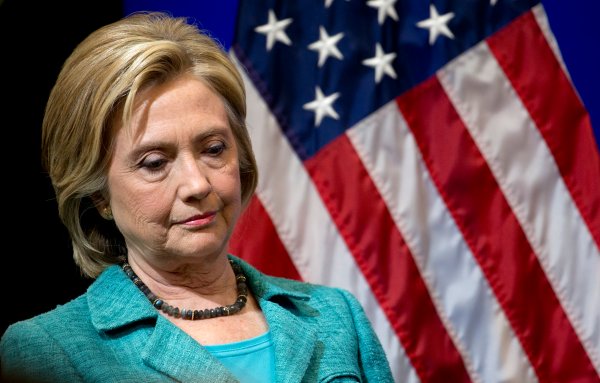 Hillary Clinton Is Shedding Democrat Support
Next Up: Editor's Pick